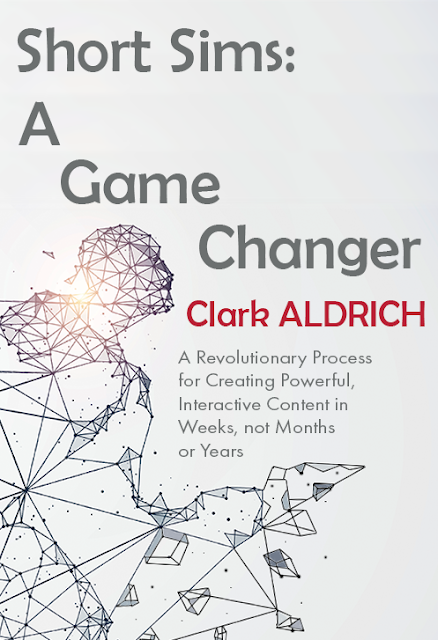 Clark Aldrich, one of the top educational simulation designers in the world, is about to release his sixth book Short Sims: A Game Changer, a revolutionary proposition for finding the synergy between meaningful interactivity and cost effectiveness that is necessary for broad adoption. A proposition that aims to democratize interactivity in educational media.

Why Short Sims?
According to Clark, there is a growing realization that significant interactivity is necessary to a successful learning program. “The necessity of interactivity is why educational simulations and serious games have evolved quickly over the last couple of decades,” he says. “The research tells us that interactive experiences work, and they can scale the development of competency and conviction better than other approaches. However, traditional interactivity is expensive to build”, states Clark and proceeds:

“It is time consuming. Interactive content typically is platform dependent.  Many organizations have been tempted by computer game-like experiences, but have held off because of cost, or have built just one because of time frames involved.   Sims that follow the development path of today's computer games, even mobile apps, are not likely to currently grow beyond a niche during the current planning horizon.”

“The inherent open endlessness of games also makes them too challenging to work into assessment situations. This has prevented interactive content from becoming integral to all educational media including personalized learning and more comprehensive testing.”

“As a result, the most valuable part of sim design – re-imagining content with a “learning by doing” focus – has not been done in the scale needed.”

What Are Short Sims?
Short Sims are a new type of educational media – five to twelve minutes long - with few words and many decisions. They tend to focus around a single subject area, and they can be embedded in traditional course material. They are intuitive to engage by design, typically with a multiple-choice interface.

The author’s expectation is that the new Short Sim methodology, presented is his new book, can finally spark a new broad generation of authors and consumers. Clark states that Short Sims are a revolutionary new form of educational content, and the results have already been transformative:

“They fill in the single most important gap in educational media, learning by doing, in a way that is compatible with current academic and corporate environments, infrastructures, and skill sets. Short Sims can be created in the same time frame as linear content, such as a traditional case study, with the same work effort. They can also be edited, updated, and calibrated quickly. This means, for example, that a client can commission an online course, and the developer can add in Short Sims without significantly altering the delivery schedule or the budget.”

About the Book
The soon-to-be-released book introduces a new form of interactive content, which could greatly help any organization that produces or uses educational media. Short Sims combine the time frames and flexibility of traditional linear content with the engagement and "learning by doing" nature of educational simulations.

This book is written for publishers; training organizations; professors; students and government. It combines the theory behind Short Sims with a process for development using - but agnostic of - some current development tools - with numerous illustrations including access to live examples.

Early access to three chapters of the book, as well its table of contents, is available at https://www.shortsims.com/back

About the Author
Clark Aldrich is an education technology thought leader - the author of five books and developer of patent and award-winning projects.  He currently builds custom Short Sims for organizations using a revolutionary methodology he has pioneered, or helps them build their own, through www.shortsims.com. He is also the host of an audio series called Education X Media (www.edbymedia.com) about  evolving pedagogy in academics, corporations, and the military.
​
He has been called a 'guru' by Fortune Magazine and a 'maverick' by CNN.  Aldrich and his work have been featured in hundreds of other sources, including CBS, ABC, The New York Times, USA Today, AP, Wall Street Journal, NPR, CNET, Business 2.0, BusinessWeek, and U.S. News and World Report.  He has written monthly columns for Training Magazine and Online Learning Magazine.  Previously, Aldrich was the founder and former director of research for Gartner’s e-learning coverage.

Earlier in his career he worked on special projects for Xerox' executive team.   He also served for many years as the Governor's representative on the education task force Joint Committee on Educational Technology and volunteered on several non-profit organizations aimed at child advocacy and has served on numerous boards.

He earned from Brown University a degree in Cognitive Science.

Related Posts
Clark Aldrich On Short Sims As The Next Stage Of Serious Games
The Case For Short-Form, Low-Cost Educational Serious Games
Short Sims Featured As The Cover Story Of January's TD Magazine