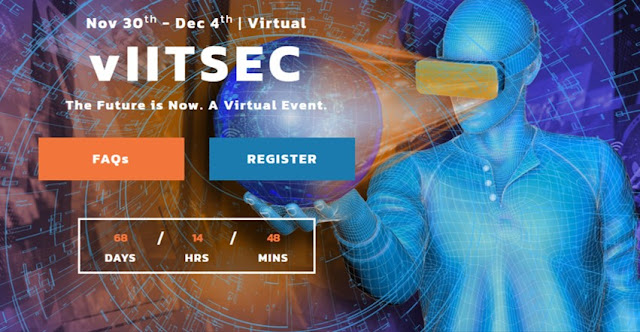 Image credit: vIITSEC - a virtual version of the trade show that will take place on the same dates planned for I/ITSEC. NTSA is developing a virtual platform that will allow the presentation of tutorials and technical papers, as well as a virtual event hall.

I/ITSEC 2020 was canceled for safety concerns amid the COVID-19 pandemic. NTSA waited until September 1 to pull the plug on its trade show, the premier annual event for the modeling, simulation, and training (MS&T) industry. The organization quickly followed up a week later with an announcement of vIITSEC, a virtual version of the trade show.

NTSA is developing an online platform that will enable the training and simulation community to virtually gather. The new format will include a full conference suite of technical papers, tutorials, and special events. A virtual exhibit hall where industry can demonstrate and communicate with the training, simulation, and education enterprise is also being built.

More information on the new format, registration, and exhibit and sponsorship opportunities will be made available at vIITSEC.org – Check it out for continued updates!

The Serious Games Showcase & Challenge (SGS&C) is the premier venue for recognition of excellence in the field of Serious Games development. Since 2006, SGS&C has helped foster creativity and innovation in Serious Games as part of NTSA’s I/ITSEC Conference held annually in Orlando, Florida.

CELEBRATING THE 15TH YEAR OF SERIOUS GAMES SHOWCASE & CHALLENGE — JUST HOW AND WHY DID IT ALL BEGIN?

This year marks the 15th anniversary of the Serious Games Showcase & Challenge (SGS&C)! 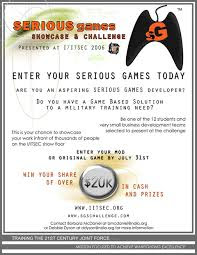 There has been a lot of change and growth in those 14 events, and organizers would love to share a little background about how SGS&C got started.

It all started immediately after the 2005 I/ITSEC, when the Naval Air Warfare Commanding Officer, Capt. Larry McCracken, requested a “special” event. Given the prevalence of Serious Games throughout training and education today, it is hard to believe there was a time when people were resistant to the idea of leveraging games for serious purposes. But at that time, there were several issues coalescing to push for the need for this new game-focused special event: Government entities were unsure of gaming as an instructional form of media; although Industry saw the potential, they were unsure of serious gaming as a niche market; and students, even as their interests continued to grow, were still unaware of serious gaming as an employment avenue.

At this time, there was no existing platform for promotion and exhibition of game-based training opportunities ala the Independent Games Festival (IGF) at Game Developers Conference. It seemed to the group driving the Serious Games initiative that I/ITSEC was a logical location to showcase Serious Games and their associated benefits.

That next fall, in 2006, the Serious Games Showcase & Challenge at I/ITSEC under NTSA sponsorship began, led by IPT Chair, Kent Gritton (NAWCTSD) and Deputy Chair, Curtis Conkey (NAWCTSD). The first year was based on attracting the mythical “garage game developers,” there were company size restrictions, company financial restrictions, and restrictions that prohibited government-funded entries. Under these criteria, the first Serious Games Showcase & Challenge featured six finalists:

All and all, in its first year, the SGS&C had successfully laid down roots to grow into the much larger event it is today. Those participants helped to kick off an event that would eventually grow exponentially and garner the attention and support of an entire I/ITSEC community in the years to come.

Look for future newsletter updates and website announcements at sgschallenge.com to learn more about this year’s unique 15th Anniversary.