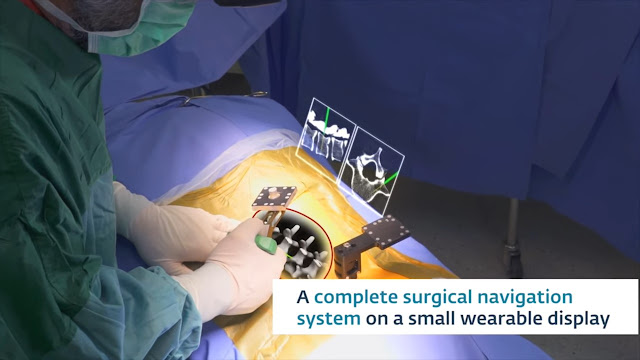 Image credit: Augmedics xvision Spine System
xvision allows surgeons to visualize the 3D spinal anatomy of a patient during surgery as if they had “x-ray vision,” and to accurately navigate instruments and implants while looking directly at the patient, rather than a remote screen.

Augmedics, a Chicago-based company and a pioneer in AR surgical image guidance, has announced its groundbreaking xvision Spine System has been successfully used for the first time in a spinal fusion surgery in the United States at Johns Hopkins.

“This is like a GPS for the spine,” said Dr. Timothy Witham, director of the Johns Hopkins Neurosurgery Spinal Fusion Laboratory, who was one of three surgeons performing the procedure.

Hands-Free Technique Shortcomings
Each year there are approximately 1.62 million instrumented spinal procedures performed in the United States alone.  The majority of those are done using a hands-free technique, which can lead to suboptimal outcomes, including up to 31 percent of freehand surgeries result in inaccurate screw positioning; neurological complications due to screw malposition in 2.3 percent of cases; and, up to three percent require reoperation within 30 days to reposition screws, creating the possibility of more surgical-related complications.

xvision Spine System Addressing Surgeons’ Unmet Needs
Surgical navigation systems significantly improve the outcomes, with more than 95 percent success rate as a result of better accuracy. They also cut screw insertion time by 50 percent and provide a 92 percent decrease in X-ray radiation. However, only nine percent of spine surgeons routinely use them, and 66 percent never do. This can be attributed to a number of factors: surgeons find them to be uncomfortable, and they do not meet surgeons’ expectations in terms of time efficiency, ease of use, and integration into the surgical workflow.  In addition, they distract surgeons from their patients by requiring them to look at a remote screen across the room or placed at the patient’s feet.

To address the unmet needs of surgeons, the xvision Spine System consists of a transparent near-eye-display headset and all elements of a traditional navigation system. It accurately determines the position of surgical tools, in real time, and a virtual trajectory is then superimposed on the patient’s CT data. In a minimally invasive procedure, the 3D navigation data is then projected onto the surgeon’s retina using the headset, allowing him or her to simultaneously look at the patient and see the navigation data without averting his or her eyes to a remote screen during the procedure. The system is designed to revolutionize how surgery is done by giving the surgeon better control and visualization, which may lead to easier, faster, and safer surgeries. 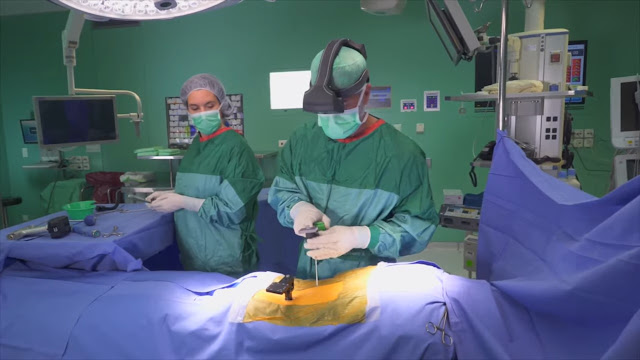 
In December, Augmedics announced U.S. Food and Drug Administration (FDA) 510(k) clearance and the U.S. launch of its xvision Spine System (XVS), the first AR guidance system to be used in surgery. xvision is now available for sale in the United States, with headset distribution underway. Augmedics plans to explore additional surgical applications for xvision beyond spinal surgery. The system’s small footprint, economical cost and compatibility with current instrumentation are designed to allow easy integration into any surgical facility nationwide. 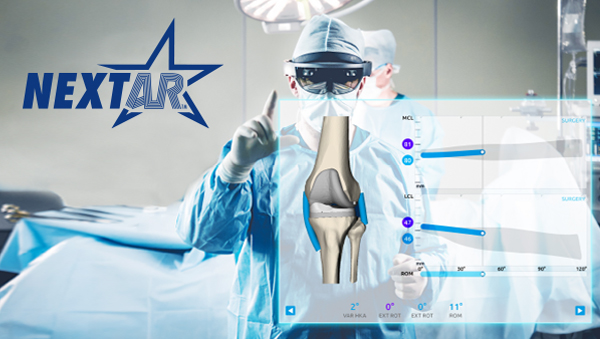 The NextARTM TKA is the first application of a new platform technology, which will be extended to hip, shoulder, and spine procedures, designed and engineered with Artificial Intelligence and Machine Learning that make pre-operative CT-based planning and analysis efficient and precise.

The NextARTM TKA Application has the goal to improve efficiency and precision in total knee replacement and deliver personalized planning, with low upfront capital investment required by clinics and hospitals, as well as economic benefits to the healthcare system through OR efficiency and low cost per procedure. This new platform is expected to be an optimal solution particularly for U.S. ambulatory surgery centers (ASCs), which provide same-day surgical care.