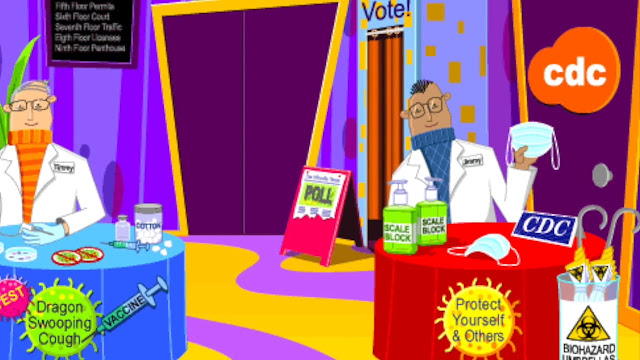 WITH THE JUST ANNOUNCED NEW SUPPORT FROM THE NSF, THE COLLABORATIVE TEAM OF ACADEMIC RESEARCHERS AND WHYVILLE’S DESIGNERS AND CREATORS WILL ADAPT VIRTUAL PANDEMIC LEARNING TO ADDRESS ISSUES AND CHARACTERISTICS SURROUNDING COVID-19

The creators of Whyville.net have announced a National Science Foundation (NSF) COVID-19 grant funding a collaborative partnership with The University of Pennsylvania and Utah State University to further extend their 15 years’ work educating children about epidemics to the current COVID-19 pandemic. The grant will also specifically fund tools and training to support teacher use in classrooms.

A virtual game-based learning world with over 8.7  million registered players (average age 13, 78% female), Whyville.net includes hundreds of different games and activities, sponsored by a wide range of public and private organizations.  15 years ago, Whyville’s creators and producers began to explore how virtual environments could help students understand public health outbreaks and in particular, the important role of individual behavior in determining the extent and time course of infectious diseases. The response of Whyville’s users to a number of virtual pandemics over the subsequent years have also helped academic researchers better understand human pandemic reactions. As with many of the other games and activities in Whyville, the virtual pandemics were based on simulation technology, establishing conditions similar to the real world, but where the actual time course and consequences of the ‘game play’ were determined by the behavior of users themselves, rather than being story-boarded in advance.

Measured Impact On Young Learners. Before recounting the complex 15-year history of pandemic education in Whyville on which the new NSF grant rests, it is important to note that millions of users of many ages have been affected and actively responded to Whyville’s virtual epidemics over those many years. To measure and understand the consequence of this educational effort, Whyville’s academic collaborators have examined the massive amounts of data created by Whyville’s use, including millions of chat records as well as comments posted on discussion boards and articles written for the Whyville Times. Researchers have documented Whyvillians pondering the causes of the virtual viruses, bemoaning their annoying effects, and making repeated connections to real-life epidemics. For example, when the Why-Pox first appeared in Whyville, one Times author compared Why-Pox to the AIDS epidemic, in an article titled, “Why-Pox Can Not Be Contracted Through Casual Contact”.  In another article, a Times investigative reporter tested a folk theory that homemade “elixirs” being offered in Whyville could combat the Why-Pox virus; concluding the elixirs were a scam since control testing showed no effect.  Research has also demonstrated how Whyvillians change their behaviors depending on the particular properties of particular infections. When confronted with an Ebola-like virus for which there was not yet a vaccine, Whyvillians spontaneously banded together to raise funds (in Whyville’s virtual currency) for vaccine research so that it could be made publicly available to all Whyville’s citizens. These effects have been found to be characteristic of how learning manifests itself in Whyville (see Connected Play, Yasmin Kafai and Debbie Fields, MIT Press).

The new funding from NSF builds on a long history of Pandemic education in Whyville, repeatedly adapted to reflect events in the real world, while at the same time providing prolonged and sustained opportunities for deep learning in a virtual setting.  That history also demonstrates how multiple agencies and organizations supporting a virtual game-based learning world can collectively contribute to a complex and dynamic ongoing learning experience.

First introduced unannounced in , the Why-Pox gave the avatars of Whyville’s young users acne and interrupted their chat when they sneezed.   Articles contributed to the Whyville Times, as well as chat and bulletin board posts made clear that there was considerable confusion about the origin of the Why-Pox, how it spread, how long it lasted, and whether there was any kind of cure, as well as ways to prevent getting the disease - sound familiar?

A few weeks after the first Why-Pox outbreak started, it suddenly ended, with cases reappearing in a ‘second phase’ 6 months later.  This time, however, Whyville included an Outbreak Headquarters in the newly created Whyville ‘CDC’ that included a pandemic simulation engine. With this modeling tool, players could predict how long the new epidemic would last and how many avatars it would affect, depending on, among other parameters, how easily the virus spread and the amount of virtual interpersonal contact.  In effect, Whyville’s citizens also had access to complete population testing data. 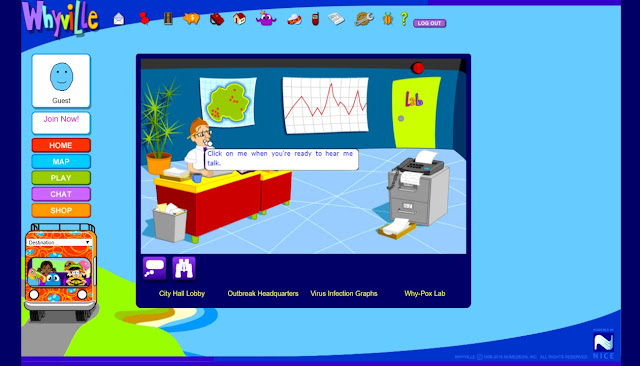 
After hearing a public talk given on the Why-Pox project, in 2009, officials for the actual U.S. Centers for Disease Control and Prevention awarded Whyville a new grant to introduce a virtual ‘vaccination station’ in Whyville.  Coinciding with another Why-Pox outbreak, users came to understand for example, the value of early vaccination as a preventive measure, as distinct from a Why-Pox cure.  Support from the real CDC, also introduced for the first-time behavioral measures users could take to mitigate the effect of the disease, including typing “cover” to cover their avatar faces before sneezing as well as “washing” their hands.

Shortly thereafter, with support from the Texas Workforce Commission, Whyville created the Whyville Bio-Plex in which users could better understand viral biology, including mechanisms of viral infection, viral mutation, and the complexities involved in creating effective vaccines against rapidly mutating viruses. 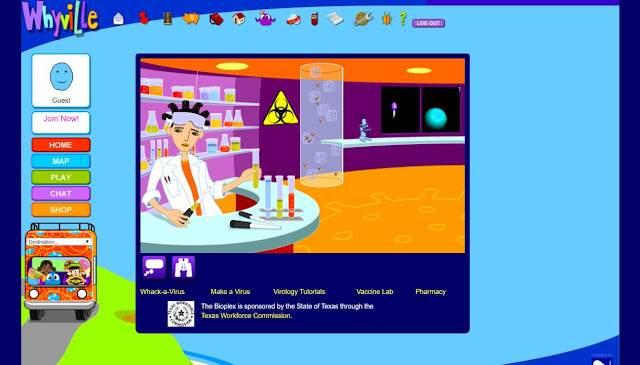 By 2015 the world was confronting a new deadly virus.  In partnership again with researchers at the University of Pennsylvania, the NSF funded a new Whyville-based project in which the Why-Pox “mutated” (again unannounced) into the Dragon Swooping Cough with Ebola like properties including the presence of asymptomatic disease carriers and the lack of a vaccine.  In the 2015 virtual pandemic outbreak, infected Whyvillians also, for the first time, suffered economic consequences, unable to receive their virtual salaries or run their virtual companies. 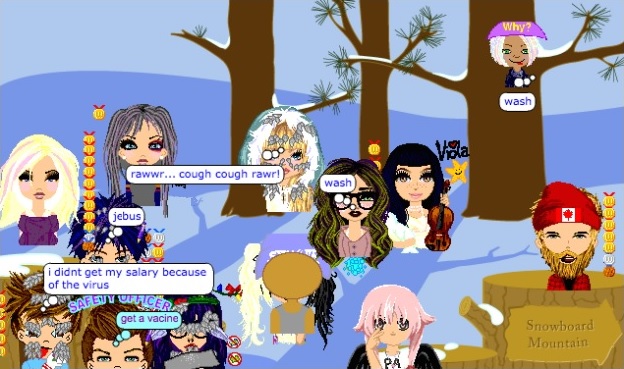 With the just announced new support from the NSF, the collaborative team of academic researchers and Whyville’s designers and creators will once again adapt virtual pandemic learning to address issues and characteristics surrounding COVID-19, while also developing teacher tools and training to support direct classroom instruction.

To quote Dr. James M. Bower, one of Whyville’s founders and the CEO of Numedeon Inc. which built and runs Whyville, “Fifteen years ago, as scientists and biologists we knew that at some point in the future we would all likely have to confront the destructive force of a world-wide pandemic.  While we wish that this were not the case now, we believe that our many years exploring pandemics and their effects with our users and our academic collaborators has put us in the position to help teachers, students and perhaps the public as a whole better understand what is happening around them, as well as the importance of what they can do personally in response.”

Teachers interested in participating in the COVID-19 educational project can register as a teacher from the front page of Whyville.net.

About Whyville’s Founders & Creators
Whyville.net was launched in 1999 by a Professor and two students at the California Institute of Technology. The professor, Dr. James M. Bower, is a computational neurobiologist and the two students: Dr. Jennifer Sun had just finished her Ph.D. in neuroscience and Mark Dinan, was a recent Caltech graduate in Physics.  Together they launched Whyville.net as the first browser and simulator-based virtual world for young learners, and the first Game-Based Learning site on the Internet. Over the subsequent 21 years, Whyville has worked in collaboration with both academics and more than 100 diverse public and private organizations to invent and explore how a virtual game and simulation-based world can uniquely engage, stimulate and educate.