The Serious Game was developed by Filament Games, who has a longstanding partnership with iCivics and their mission to make civics education accessible for all.

The flood of fake news, propaganda, rumors, and advertising that often masquerade as news has made it harder than ever to separate fact from fiction. News Literacy can help students of all ages recognize the differences between fact and rumor, news and advertising, news and opinion, and bias and fairness. This 21st-century problem requires an innovative solution that challenges people to learn news literacy skills while understanding their place as agents of factual information (Source: Center for News Literacy).

Created for secondary school students through adults, the game puts players in charge of the news aggregation site Newsably. Their mission: to protect the integrity of the site while also attracting new readers, and meet the challenge to level up from guest user to site curator.

The game gives players a look behind the headlines by teaching them how to spot so-called fake news, or viral deception; how to know when advertising is posing as news; how to identify bias in stories based on word choices and how the story is framed; how to apply journalistic standards, verifying information and images; and how to become a more astute reader of online news.

Available free online or download the app from the App and Google Play stores. 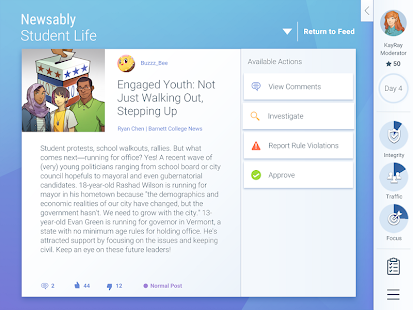 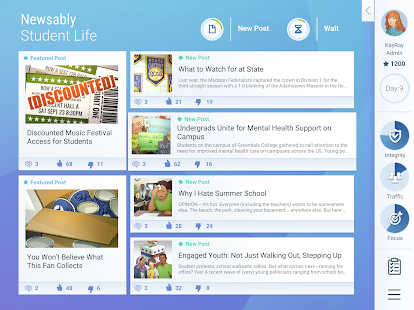 Read more about the NewsFeed Defenders game and the partnership between iCivics and Annenberg Public Policy Center in the full press release below!

NewsFeed Defenders from iCivics and the Annenberg Public Policy Center teaches students and adults to differentiate between what’s real and what’s not by challenging them to moderate an online community news site while resisting clickbait, viral rumors, and biased sources.

CAMBRIDGE, Mass., and PHILADELPHIA -- iCivics, the education nonprofit founded by Sandra Day O’Connor, and the Annenberg Public Policy Center, home of FactCheck.org and Annenberg Classroom, have released a new video game designed to teach media literacy and help both students and adults better understand what news is, and how they can avoid being deceived by misinformation.

Designed to help make sense of today’s chaotic media environment, NewsFeed Defenders is an online simulation that teaches players to detect and disregard disinformation and misinformation on the web.

Created for secondary school students through adults, the game puts players in charge of the news aggregation site Newsably. Their mission: to protect the integrity of the site while also attracting new readers.

The game gives players a look behind the headlines by teaching them how to spot so-called fake news, or viral deception; how to know when advertising is posing as news; how to identify bias in stories based on word choices and how the story is framed; how to apply journalistic standards, verifying information and images; and how to become a more astute reader of online news.

Players choose the focus of their Newsably feed: Student Life, Health & Wellness, or Sports & Entertainment. They rise through the ranks at Newsably from guest member to full community curator. Each day brings a new challenge: Should players report as a violation that fishy post about free tuition for all? Post an article about Bat Boy at Burning Man even if their newsfeed is supposed to be about Student Life? Place a trending post on the latest pop album release in Newsably’s feature spot? Or should players investigate the viral post about arrests at polling places to make sure it’s accurate?

In addition to juggling member traffic and maintaining community focus, players must ensure that the content they post is, in fact, news. That means learning to tell when posts are actually ads disguised as feature stories or viral rumors presented as news. So, even though that headline about the President adopting an alien child might catch eyes, players don’t want to post that story -- if they want to maintain a credible news site.

Players can investigate each story for reliable content, check the veracity of facts, and determine the trustworthiness of the originating source, earning points for judging accuracy, transparency, trustworthiness, and impartiality. Correctly flagging problematic posts removes the content that does not belong and allows the players to explain why.

“One of the most important things we can do to reduce the spread of misinformation is to teach media literacy to the next generation,” said Eugene Kiely, director of FactCheck.org, which won the 2018 Webby Award for best news and politics website. “This game is a fun way to do exactly that.”

“When our citizens are no longer able to discern the truth in media, we undermine one of the cornerstone institutions of our democracy,” iCivics Executive Director Louise Dubé said. “NewsFeed Defenders is unlike any other classroom tool or game because it helps students question and investigate potentially manipulated content themselves. The game replicates real-life situations in which students must decide what is credible in their own social media feeds. They must find evidence and support their editorial decisions.”

The game, which is being released as midterm election season heats up, leverages the strengths of the Annenberg Public Policy Center and iCivics, nonpartisan organizations that worked together previously to develop four games.

iCivics is the country’s largest provider of civic educational material and has created 20 games and hundreds of lesson plans to teach K-12 students the fundamentals of American democracy by using simulations to give students a first-person point of view on crucial topics such as elections, the roles of the executive branch, and the courts. Its games, which are completely nonpartisan, are available for free at iCivics.org. The Annenberg Public Policy Center’s project FactCheck.org has spent 15 years fact-checking politicians’ claims and viral misinformation. Another of its projects, Annenberg Classroom, provides teachers and classes with a free, comprehensive multimedia curriculum for teaching the Constitution.

NewsFeed Defenders also includes the following classroom supports to make it a powerful teaching tool:
● Game Guide that includes instructions, tricks and tips, discussion prompts, and activity ideas for the classroom
● An Extension Pack with a step-by-step slide deck that sandwiches the game between learning activities
● Three lessons/mini-lessons that cover the real world issues of algorithms, privacy policies, and opinion/analysis in the news

NewsFeed Defenders is available free on the web and as an app for tablets through iTunes and Google Play.

About iCivics
Founded in 2009, iCivics is a nonprofit organization committed to transforming civic learning through effective and inventive resources. iCivics was founded by Justice Sandra Day O’Connor to develop free educational video games and lessons that teach young Americans to be knowledgeable, curious, and engaged in civic life. iCivics’ game-centered curriculum provides students in grades 4-12 with the tools they need for active participation and democratic action.

About the Annenberg Public Policy Center
Founded in 1993, the Annenberg Public Policy Center (APPC) of the University of Pennsylvania is the home of FactCheck.org and Annenberg Classroom, which are dedicated to enhancing media literacy and civic knowledge. FactCheck.org is a nonpartisan, nonprofit consumer advocate for voters that aims to reduce the level of deception and confusion in U.S. politics. It has published a video and article showing voters how to spot bogus claims in the news and on social media and has partnered with Facebook to identify and label false viral posts. Annenberg Classroom, a project of the Leonore Annenberg Institute for Civics, provides teachers with a free multimedia curriculum to teach the Constitution to middle and high school students. Its resources include games, timelines, lesson plans and videos, including a dozen award-winning films produced by the Sunnylands-APPC Constitution Project, whose advisors have included Justices Sandra Day O’Connor, Stephen Breyer, and Anthony Kennedy. 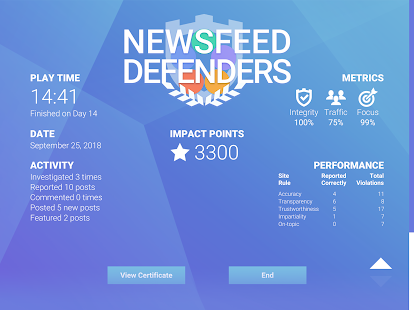