The Case For Blockchain-Based Educational Games

Image credit: Cryptage Origins - example of a game powered by the Blockchain

This year, MIT Play Labs has expanded its list of “Playful Tech Eligible Startups” to include Blockchain startups coming out of the MIT ecosystem, expecting innovations beyond cryptocurrency.

Although only a decade old, Blockchain technology has already proven to be a significant catalyst for disruption across multiple industries. From logistics to facilitating cross-border transactions, this new technological framework has shown tremendous potential to decentralize and challenge highly entrenched industries. It has been considered as part of the fourth industrial revolution since the invention of steam engine, electricity, and information technology (Chung and Kim 2016; Schwab 2017).

The strength of Blockchain technology is that it has no single point of failure, letting people who have no particular confidence in each other collaborate without having to go through a neutral central authority. It is expected to revolutionize the operating modes of commerce, industry, and education, as well as to promote the rapid development of knowledge-based economy on a global scale.

What Is Called Blockchain And How it Works
Also known as Distributed Ledger Technology (DLT), Blockchain enables distributed public ledgers that hold immutable data in a secure and encrypted way and ensure that transactions can never be altered. While Bitcoin and other cryptocurrencies (Litecoin, Ethereum, and the like) are the most popular examples of Blockchain usage, DLT is finding a broad range of uses.

A block is a record of new transactions. Each time a block is “completed”, it gives way to the next block in the blockchain. A block is thus a permanent store of records which, once written, cannot be altered or removed. 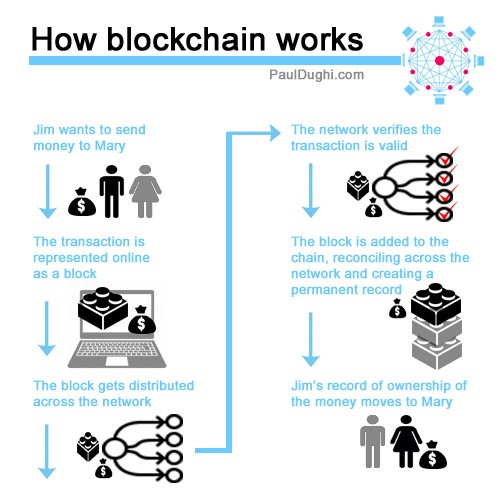 Image credit: Paul Dughi
VP/General Manager at WAAY-TV & AudiencePop, named one of Broadcasting and Cable’s Digital All-Stars “On the front lines of transforming the broadcast industry”

William Mougayar, author of The Business Blockchain, described it this way:
“Imagine two entities (e.g. banks) that need to update their own user account balances when there is a request to transfer money from one customer to another. They need to spend a tremendous (and costly) amount of time and effort for coordination, synchronization, messaging and checking to ensure that each transaction happens exactly as it should. Typically, the money being transferred is held by the originator until it can be confirmed that it was received by the recipient. With Blockchain, a single ledger of transaction entries that both parties have access to can simplify the coordination and validation efforts because there is always a single version of records, not two disparate databases.”

Blockchain is going to be used for more than just currency and transactions. To give an idea of how seriously it has been studied and adopted, IBM has 1,000 employees working on blockchain-powered projects. They have also set aside $200 million for development. Financial and tech firms invested an estimate $1.4 billion dollars in blockchain in 2016 with an increase to $2.1 billion dollars in 2018.

Blockchain Technology, Educational Games and Personalized Learning
Blockchain technology can be applied to education in many innovative ways. For both learners and teachers, it has a great potential for application prospects on learning activities design and implementation, collaboration, storing achievements and tracking the whole learning process.

A Blockchain Game is any game that is built, even partially, on top of a public blockchain that enables each player to own and control their own data. This means that whoever is hosting and running the game, has to request permission from a player before they can write a new record to that player’s database. Since blockchains are essentially large, public databases, any developer from any location can access the player records stored on the blockchain. This adds a certain element of extensibility to blockchain games, because the content and data stored on a blockchain are more easily shared between different platforms and services.

Another exciting application of blockchains to gaming comes in the form of education and tutorials: picture querying a player’s blockchain records, looking for similar games they have played in order to minimize the “time-to-fun/learn metric” for your game. You can do things like skip a tutorial, because you are able to confidently assume that the player understands the core concepts of the game.

About Play Labs
Play Labs is an incubator/accelerator which invests and mentors startups that are utilizing playful technology in a variety of industries. During the program, each cohort is mentored by a group of MIT staff as well as successful entrepreneurs. Play Labs is hosted on the MIT Campus by the MIT Game Lab during the summer.