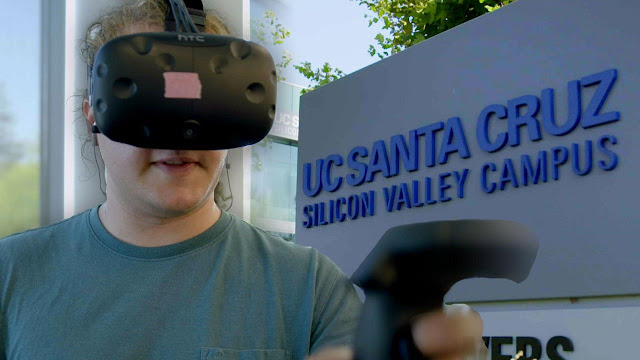 “This program will formalize and expand work already being done in the Games and Playable Media Program such as Peace and Order, a virtual reality game by GPM student Chelsea Manzano, which explores the human consequences of the drug war in the Philippines,” he said.

The UCSC MS in Games & Playable Media and MS in Serious Games are 5 quarter, intensive programs .The Silicon Valley Campus is home to both programs.

“In the past year alone, more than 50 members of the interactive entertainment industry have visited the Games and Playable Media students. Alumni have gone on to launch acclaimed games and join major gaming companies, such as Naughty Dog (Sony), Activision, and Wargaming.net,” Brandt added.


Nineteen months ago, a robot cut the ribbon on the UC Santa Cruz Silicon Valley Campus. Based in Santa Clara, the Campus is a multi-disciplinary teaching and research hub that is home to a master’s degree program in games and playable media, engineering faculty, the new office of industry alliances and technology commercialization, UCSC Silicon Valley Extension, UC Scout, and soon a great deal more.

UC Santa Cruz has ambitious growth plans for its Silicon Valley Campus, with a pipeline of starting with new industry-oriented professional master’s programs planned to launch here in the coming years.

About Vice Chancellor Brandt
Scott Brandt is Professor of Computer Science, the UCSC Director of the Institute for Scalable Scientific Data Management, and Director of the UCSC Systems Research Laboratory. He is also co- founder of the UCSC Storage Systems Research Center. Scott's research is in the area of Computer Systems. He specializes in both storage systems and real-time systems. His current storage system research focuses on high-performance peta-scale distributed object-based storage, while his real-time research focuses on integrating real-time and non-real-time processing into a uniform processing environment. His most recent research integrates the two, researching novel solutions for robust guaranteeable management of varied system resources, including CPU, disk, memory, and network.