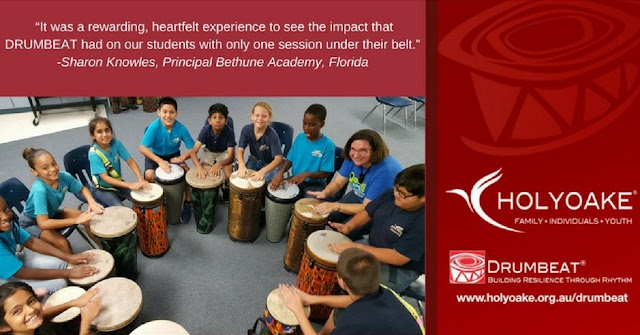 The African djembe drum is a perfect medium – it’s easy to play (reduces fear of failure), it’s powerful (demands attention) and playing it is physical (releases tension). Participants learn how to cooperate, collaborate and communicate without the threat of misunderstanding and judgement that dialogue can bring. 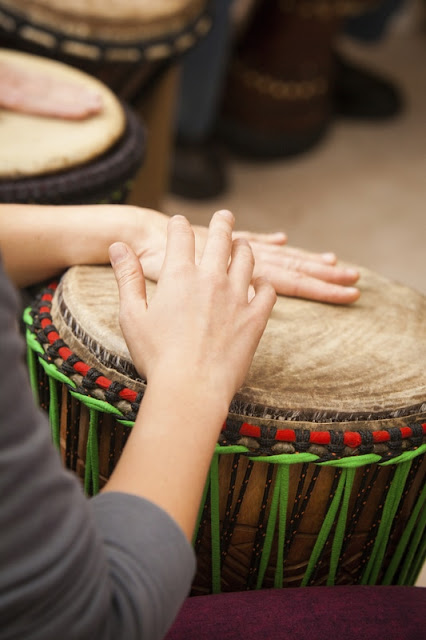 In Australia, the DRUMBEAT Program is a recognized unit of curriculum and delivered as a course of study in “Personal Development”.

DRUMBEAT has over 6000 facilitators trained worldwide (200 in the US). The US has also its own Master Trainer – Jessica Fredricks.

The Program is currently running in over 50 schools and youth service/therapy organizations across Australia with plans to release in the US in the next six months.

DRUMBEAT Quest®, the game, follows the story of The Drummer who has been called upon to save the community from darkness by rekindling the twelve Beacons of Hope.

Robot Circus designed and developed the game for Holyoake, the Australian Institute for Alcohol and Drug Addiction, specialized in family counselling and support. According to the developer, DRUMBEAT Quest® is an “innovative fusion of two popular game genres: the meta-game is a role-playing game adventure; the core gameplay is a rhythm based, endless runner.”

The DRUMBEAT Quest® storyline puts the player, as The Drummer, into a fantasy world where darkness has spread. In order to bring light (trust and hope) back to the community, the player must venture into the unknown and confront challenges that replicate many of the challenges young people face in real life. 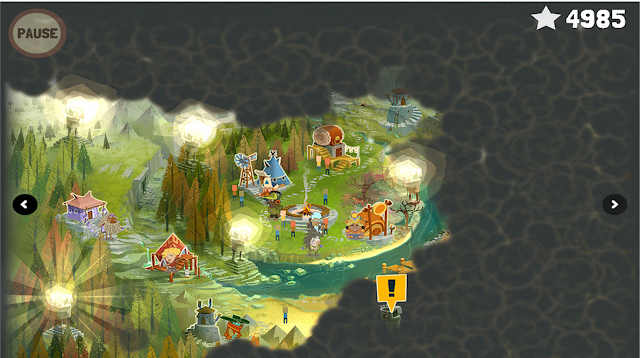 Players’ quest is to overcome all the challenges that stand between them and the goal of rekindling the twelve Beacons of Hope. 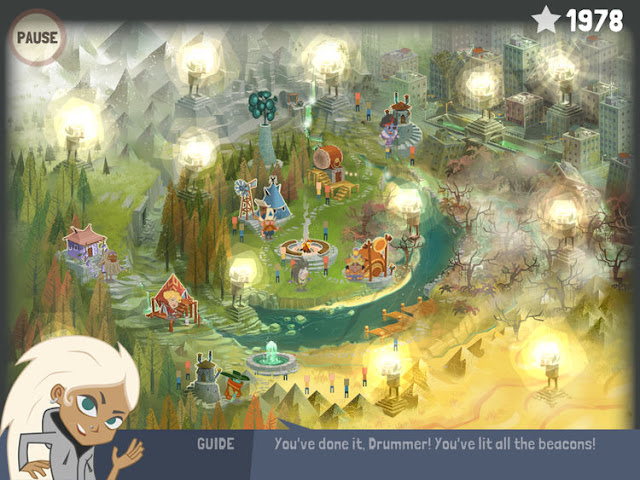 Scenarios in the game include rescuing vulnerable friends, confronting monsters, confronting bullies, avoiding peer pressure, making choices on which characters to trust, confronting the dark side of our own nature, and choosing which rhythm will be most effective - Listening, Respect, Tolerance and Teamwork. Players are rewarded as they align their rhythm to the world around them. Rhythms allow the character to move, and different rhythms provide different powers. 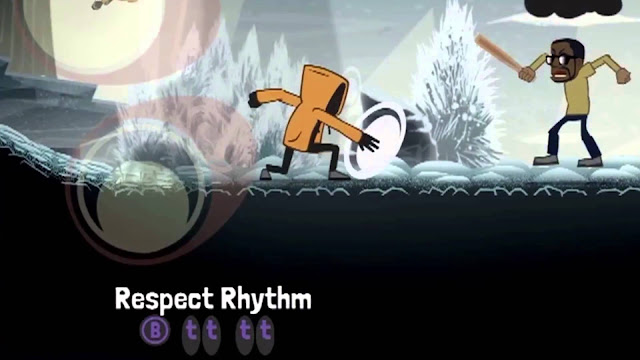 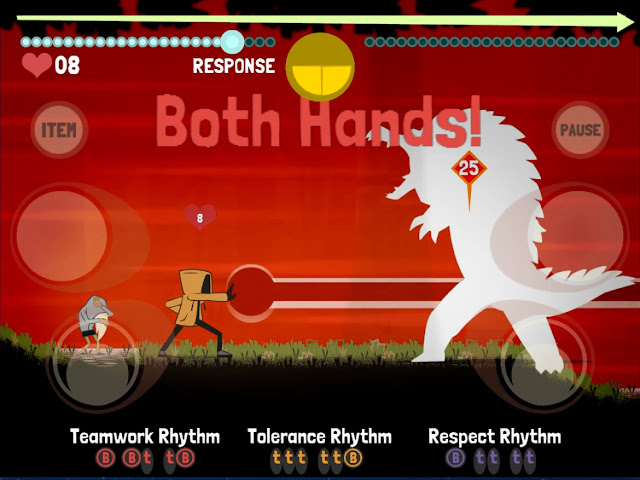 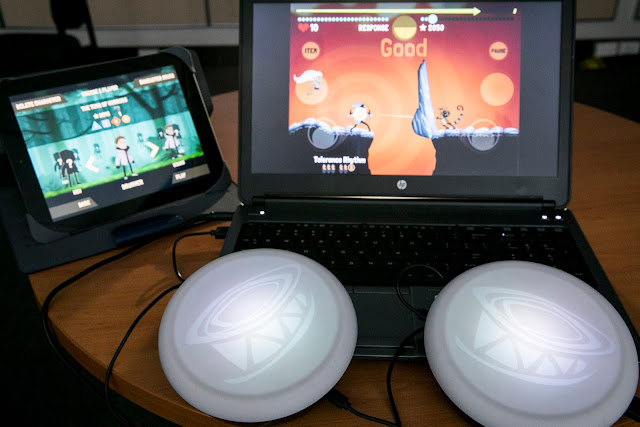 The game is built with a rhythmic interface - the player must keep the beat by correctly playing a combination of rhythms to light the Beacons. Rhythmic music can assist with regulation, reducing anxiety and impulsivity while improving cognition.

The ability to keep a beat involves synchronization between parts of the brain responsible for hearing as well as movement, which is connected to our language and reading abilities.

Designed to support the rhythmic interface, the eDrum integrates cross lateral movement with gameplay to engage the whole brain. When children perform cross lateral movements, it requires both hemispheres of the brain to activate improving neural pathways associated with motor coordination and cognition.

The eDrum is compatible with the desktop version of DRUMBEAT Quest. It is a USB peripheral that works like a keyboard with two keys (Bass and Tone). 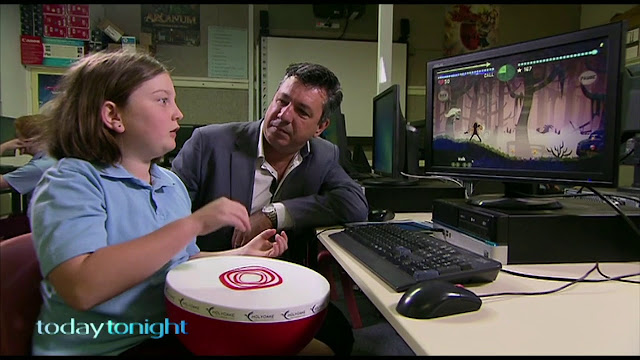 In the desktop version, rhythms are played on an electronic drum (eDrum) connected to the computer via a USB 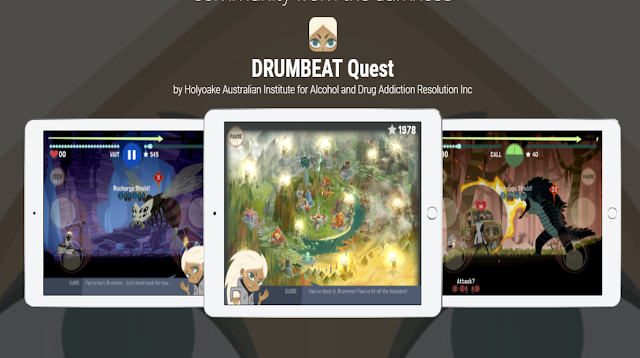 For the tablet version, rhythms are played on drum symbols on the screen

The DRUMBEAT Quest® game was designed in alignment with the Australian Health and Physical Education curriculum, enhanced by the integration of STEAM interdisciplinary concepts and principles (such as ethical analysis and decision making) to develop higher-order thinking skills and address core social emotional competencies  identified by the Collaborative of Academic, Social, and Emotional Learning (CASEL).

Research shows that developing social and emotional skills is crucial to being able to cope with life’s ups and downs, as well as being successful in the workplace and a valuable member of the community. Social and emotional learning can reduce risky behaviors such as violence, bullying, alcohol and drug use and social isolation.

It is intended for all young people and recommended for Year 5 (Grade 5 in the US) and above. In one-on-one counselling applications, the game can be used with younger children. 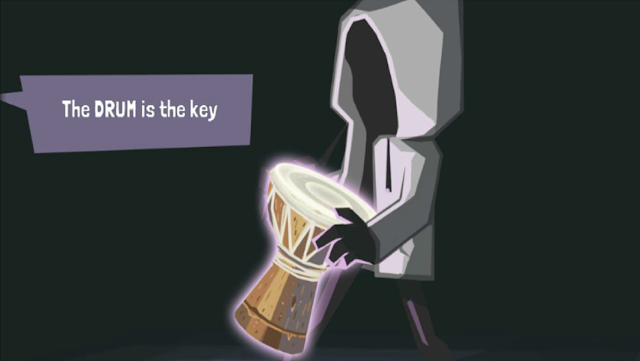