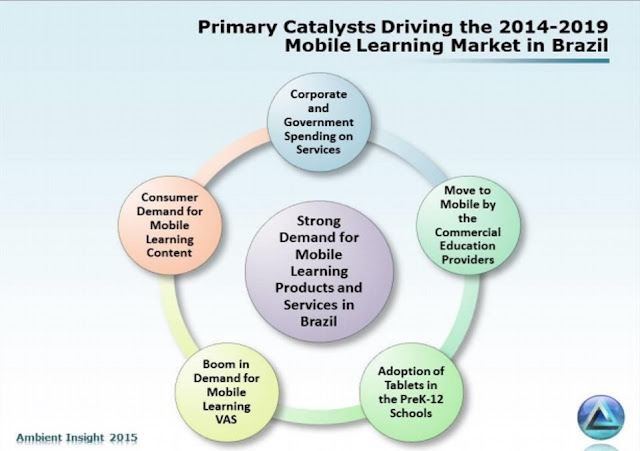 As of April 2015, Brazil had a population of just over 200 million people and a mobile penetration rate of 142%. Brazil accounts for one third of all mobile users in Latin America and is adding one million mobile subscriptions users a month.

Fast 4G networks are relatively new in Brazil; the mobile network operators (MNOs) started rolling out 4G in late 2012 and had commercial networks in operation by early 2013. User uptake has been brisk. According to the government telecommunications regulator ANATEL, there were 6.7 million 4G-enabled smartphones in use in the country by the end of 2014, which was a stunning 416.5% increase from the year before.

In April 2015, the government (in partnership with the telecoms) announced an ambitious $16.5 billion program called Broadband for All that will attempt to connect 95% of the population to fixed and wireless broadband by 2018.

Until recently, imported smartphones and tablets were prohibitively expensive due to steep import tariffs. This was an inhibitor in the market. The government passed a law in September 2011 that offers tax incentives for device makers that set up manufacturing plants in Brazil. Smartphones and tablets prices have dropped 36% since late 2011; over 80% of all tablets sold in Brazil are sold for the equivalent of $160 or less. 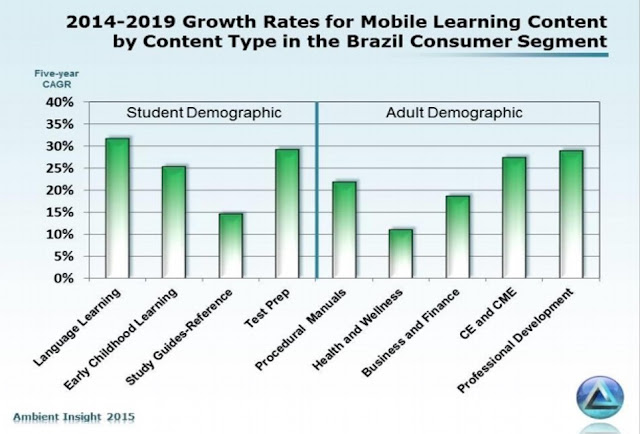 In addition to the strong mobile ecosystem in Brazil, there are five major catalysts directly impacting the Mobile Learning Market in Brazil: the strong demand for custom content development services, particularly in the corporate and government segments; the migration to mobile formats by the major education publishers and commercial training and education providers; the adoption of tablets in the academic segments; the continuing boom in the demand for Mobile Learning value added services (VAS); and the massive demand for Mobile Learning content in the consumer segment.

These catalysts combined have created lucrative revenue opportunities for Mobile Learning suppliers competing in Brazil. The report identifies those opportunities by buyer segment and product type.

Who is the Buyer?

Except for the federal government segment, Mobile Learning revenues will more than double by 2019 in all the other buying segments. The growth rate for Mobile Learning in the federal government segment is 9.4%, which is a healthy rate for any digital education product. It only appears low in the context of the high growth rates in the other segments.

The growth rate for Mobile Learning in the state and municipal segment is also quite healthy at 15.0%. These agencies are expanding their so-called eGov initiatives with custom mobile apps on a wide range of subjects. 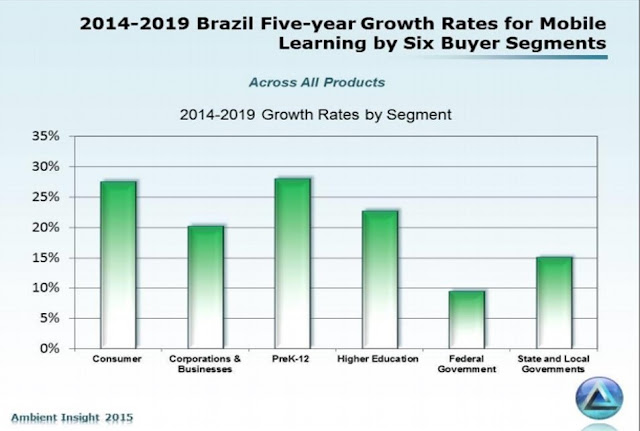 The corporate segment in Brazil has a 20.2% growth rate for Mobile Learning; this is one of the highest corporate growth rates in the world.

Mobile Learning has experienced slow adoption rates in most countries in the world. Brazil is one of the exceptions.