Game developers, technologists and peace builders around the world are invited to submit Serious Games that facilitate dialogue and prevent violence.

The United Nations Alliance of Civilizations (UNAOC), the United Nations Development Program (UNDP) and Build Up have launched PEACEapp, a global competition to promote digital games and gamified apps as venues for cultural dialogue and conflict management.

PEACEapp builds on the success of Create UNAOC – a competition for apps and games that promoted intercultural dialogue run by UNAOC and its partners in 2012.

The competition asks entrants to engage with questions that are central to building peace. How can we create new spaces for dialogue and shared action aimed at preventing violence? Is the key to provide opportunities for contact among individuals of different cultural or religious backgrounds? Can sharing stories also encourage mutual respect for cultural and religious values? Or is it about offering people tools to question and reframe their identity?

Supported by a range of partners including Games for Change, the Institute for Economics and Peace, the MIT Center for Civic Media and the ICT for Peace Foundation, PEACEapp is intended to give developers the chance to showcase their work – new, existing or in progress – and engage with questions that are central to building peace.

Of all the technological tools increasingly available to peace builders, Serious Games present opportunities that are particularly relevant to fostering dialogue that prevents violence.

“The very nature of social media and much of the new technology that continues to emerge around phones, tablets and other devices promote human togetherness, tolerance and inclusiveness. Potential for so many areas of our lives is increased, including to help prevent conflict and promote peace. I hope that web, app and game developers around the world take up this challenge. UNDP is excited to be working with PEACEapp to promote conflict management and dialogue”, said Jordan Ryan, Director of UNDP’s Bureau for Crisis Prevention and Recovery.

The competition is open to three kinds of entries at all stages of development – from prototypes to fully developed apps: 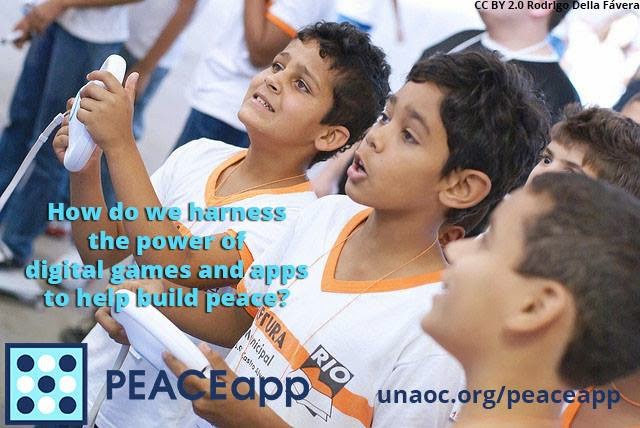 Digital games and gamified apps submitted to PEACEapp will be reviewed by an international jury according to the criteria described at http://www.unaoc.org/peaceapp/judges

To submit a digital game or gamified app, entrants must complete the entry form on PEACEapp website in English and submit a video walkthrough or presentation of a working game / app, game / app alpha, beta prototype or implementation plan for using an existing game / app by October 15, 2014. Participants must be 13 years or older.

Make sure to check the eligibility criteria, rules and regulations at http://www.unaoc.org/peaceapp/rules/