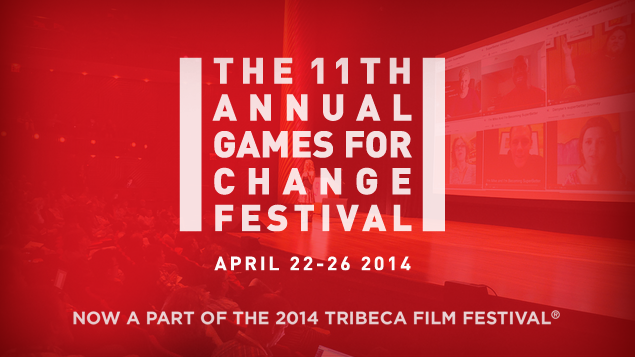 The 2014 Games for Change Festival starts tomorrow with three days of stellar speakers and panels, and game demos, followed by a full day of fun on the streets of lower Manhattan.

Craig Hatkoff, founder of the film festival, said the collaboration will allow audiences, filmmakers and industry executives to interact with a new form of storytelling. Of particular interest to Tribeca Film Festival officials was the idea that gaming had grown beyond entertainment. Since it was founded in 2004, Games for Change has helped create and promote games with a goal of improving society. Its annual festival is now the largest gaming event in New York.

“Tribeca recognizes the transformative power of gaming that goes far beyond traditional entertainment value of games. The impact and integration has been spreading rapidly across virtually all domains, scaling to social good, from education to healthcare, and from conflict resolution to religion,” said Craig Hatkoff. He continued: “By partnering with Games for Change, we hope to bring together the most cutting-edge creators of games, educators, and the world’s greatest story-tellers. Together, they will create the latest innovations in gaming for the social good to even wider audiences. We look forward to further expanding our relationship with Games for Change in the future.”

Games for Change Festival will take place at the NYU Skirball Center for the Performing Arts as part of the 2014 Tribeca Film Festival (TFF). The venue will also host the fifth edition of the Annual Games for Change Awards

The Games for Change Arcade, which is open to the public, will be held at the TFF Family Festival Street Fair, taking place on Saturday, April 26.

Via: Brian Crecente on Apr 21, 2014 at 10:37a - Games For Change Goes Mainstream With The Help Of Tribeca Film Festival

“For the first time ever, Games for Change will be a part of Tribeca's Family Festival Street Fair. The fair, which takes over the Tribeca neighborhood in New York City on April 26, will include a street (Jay Street) set aside for the Games for Change Public Arcade. The street will include a FarmVille exhibit of livestock by Zynga to highlight their charity work, a display by New York's American Museum of Natural History and street games by Come Out and Play and Sesame Street.”

The idea of being in the public space is to take Games for Change to the people who will see it for the first time. And that's one of the major themes of the show. In the past, the festival has fallen into the trap of becoming an echo chamber of sorts, a festival designed for people who were already aware of what games have to offer and their ability to change the world.

“This new take on the festival brings with it a rethinking of both the audience and the presenters.