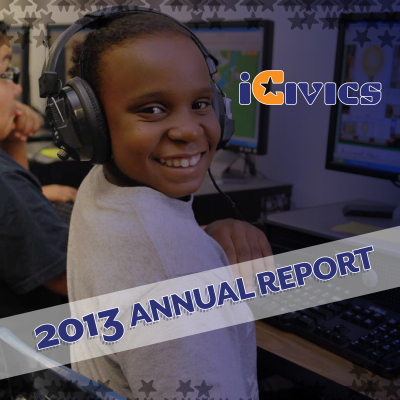 Since 2009, iCivics has been dedicated to reinvigorating civic learning through interactive and engaging learning resources, among them 19 award-winning Serious Games. These resources have now been proven effective by independent evaluations from Arizona State, Baylor, and Tufts Universities.

The 2013 iCivics Annual Report shows that iCivics teacher network tripled this year, reaching 35,000 educators across 9,000 schools while students across the country played iCivics Serious Games an astonishing 5.9 million times, preparing themselves for civic participation. Approximately half of all middle school social studies teachers in the U.S. rely on iCivics – a significant milestone to reach in four years.

At the same time, they demonstrate increasing evidence of the long-term impact of iCivics in shaping future citizens. In a randomized-control evaluation, Tufts University verified the effectiveness of iCivics argumentative writing tool, Drafting Board. Research from SRI International found Drafting Board to be one of the most effective Common Core literacy resources released in 2011-2013. 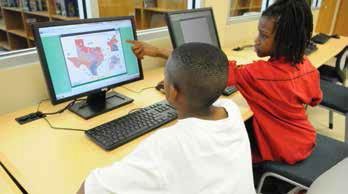 In 2013, Justice O’Connor continued her passionate advocacy for civic education reform nationally. The Justice keynoted a 2013 civics education conference at Harvard Law School entitled “Why Civics Matters to Democracy, Society, and You”. In September, Justice O’Connor and iCivics partnered with former Senator John Glenn to coauthor an open letter highlighting the importance of civic education across disciplines.

Retired U.S. Supreme Court Justice Sandra Day O'Connor helps a student learn as she plays a game on iCivics. Students can play games and simulations on iCivics focusing on each of the three branches of government as well as individual rights and responsibilities.