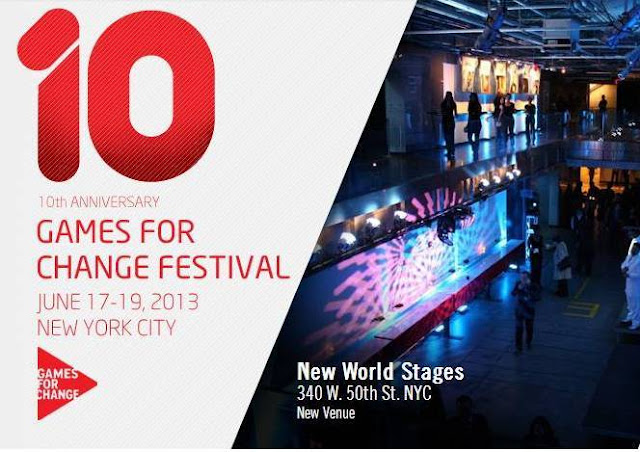 Games For Change Festival will take place under one roof at New World Stages
Tickets Currently On Sale at GamesforChange.org/Festival2013

Hosted and created by Games for Change, a non-profit that catalyzes social impact through digital Serious Games, the Games for Change Festival is the largest gaming event in New York City and the leading international event dedicated to giving Serious Games creators a venue to discuss using game technology to make the world a better place.

Commemorating a special 10th Anniversary spotlight are guest curators Babycastles,  Hide&Seek and the Global Game Jam and a series of keynote presentations by thought-leaders from the gaming world, including award-winning game designers Brenda Romero and Jesse Schell, and editor and journalist Leigh Alexander, amongst others.

Other program highlights include: the presentation of finalists for the organization’s first large-scale game design competition; the Annual Games for Change Awards; and a special spotlight with Zynga.org highlighting the lessons learned and impact made through Games for Change’s executive-produced Facebook game Half the Sky Movement: The Game.

New to this year’s festival, The Marketplace presents an opportunity for festival attendees to meet companies, publishers, developers and service providers who are working at the forefront of games for change to facilitate business-to-business activity.

The Marketplace offers participating companies an opportunity to demonstrate their products or services as part of the official program. With this year's change of venue, the entire Festival will take place exclusively under one roof at New World Stages. As such, the Marketplace will run the full duration of the Festival – Monday, June 17 to Wednesday, June 19 – and participating companies will be directly in the center of activity for all 800+ participants.

About Games for Change

Founded in 2004, Games for Change facilitates the creation and distribution of Serious Games for social impact that serve as critical tools in humanitarian and educational efforts. The organization aims to leverage entertainment and engagement for social good and most recently served as the Executive Producer for the incredibly successful Half the Sky Movement: The Game inspired by the global movement created by Pulitzer-Prize winning authors Nicholas Kristof and Sheryl WuDunn. To further grow the field, Games for Change convenes multiple stakeholders, highlights best practices, incubates games, and helps create and direct investment into new projects.