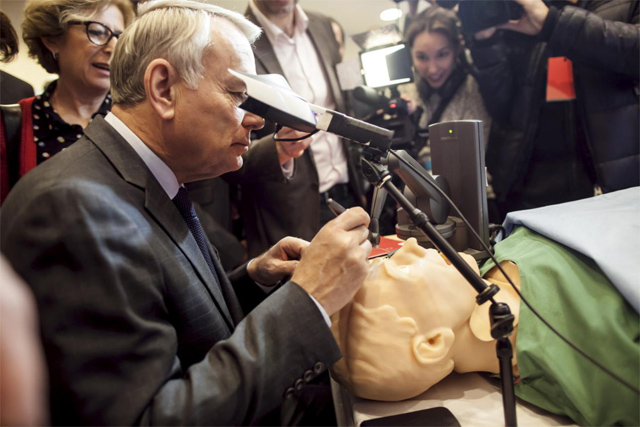 Via: ForgeFX On Simulators And Real-Time 3D Serious Games

ForgeFX reports on a recently published study, authored by RAND Corporation, titled Cataract Blindness and Simulation-Based Training for Cataract Surgeons, that provides an assessment of a global campaign, named HelpMeSee, to eliminate cataract blindness which is endemic in developing countries.

Through an inexpensive, quick and effective procedure known as Manual Small Incision Cataract Surgery (MSICS), HelpMeSee plans to provide help to those suffering from blindness due to cataracts. The combination of a shortage of well-trained surgeons who are familiar with this technique, and the fact that approximately one-half of all blindness cases in the world are due to cataracts, is expected to result in more than 30 million people worldwide requiring cataract surgery by the year 2020.

In an effort to provide high-volume training for MSICS, that is portable and affordable, HelpMeSee has developed a high-fidelity training simulator that allows surgeons to quickly become proficient at the procedure.

James Ueltschi is the driving force behind HelpMeSee since the idea sparked in 2008. As Chairman and Treasurer of HelpMeSee, James is leading a multi-disciplinary team that is bringing the technology of flight simulators and advanced training methods to surgical training and medical practice. The goal is to be able to train an eye surgeon in six months – instead of 8 years. During his early career, James was the Vice President and a Treasurer of FlightSafety International as well as serving on the board of Orbis.

Use of high-fidelity simulators to train cataract surgeons in developing nations could dramatically cut the prevalence of blindness around the world and increase economic output, according to a new RAND Corporation study.

Cataracts are the leading cause of vision loss, accounting for more than half of all blindness worldwide. An estimated 21 million people are blind from cataracts, almost all in developing countries.

Because cataracts are a problem that normally appears during older age, cataract-related eye problems will grow as populations across the developing world get older. Blindness and visual impairment has enormous negative impacts on the quality of life, reducing life expectancy and economic productivity.

The simulators, modeled on ones used successfully for decades to train airplane pilots, are being developed by HelpMeSee, Inc., an organization whose mission is to eliminate cataract blindness worldwide.

HelpMeSee plans on training 30,000 cataract specialists in developing nations where conditions are most dire.

If the uptake is high, the plan could prevent 21 million cases of blindness and more than 113 million cases of impaired vision by 2030 according to RAND researchers. The biggest economic benefit in terms of absolute numbers would be in Southeast Asia.

Despite the potential, challenges remain according to the report. The simulators will need rigorous acceptance testing to assess their effectiveness and practicality as surgical training tools.

In addition, independent practitioners will take responsibility for their own outreach and screening of patients. This is a major innovation from traditional cataract care offered through hospitals. Quality of their services will be monitored through cloud-based electronic patient records. This emphasis on independence and remote monitoring may be controversial.

According to RAND, the HelpMeSee program could eliminate much of the preventable blindness caused by cataracts across the developing world and thus improve the lives of millions of people. Still, the approach needs to be proven. There are significant challenges to getting the program operating effectively and marketing it across many diverse nations.

HelpMeSee, in cooperation with host countries, plans to operate regional learning centers in Asia, Africa and Latin America. The free-standing in-residence training centers will train up to 1,000 new cataract specialists each year in each region.

The RAND report points out that there is no prospect that the current supply of ophthalmologists will be adequate to make a meaningful impact on the backlog of people needing help. In many developing countries there is only one ophthalmologist per million people. Where appropriate, HelpMeSee proposes to provide ab initio training to candidates who have the requisite aptitude and background.

According to Jim Ueltschi, Chairman and co-founder of HelpMeSee, “Graduates will have successfully completed the training curriculum and have objectively and subjectively demonstrated high level proficiency in all areas of the procedure”.

In some areas, especially Africa, significant numbers of non-physicians are already performing cataract surgery, though there is little data on the quality of those surgeons.

“Although this is a highly challenging undertaking, our extensive background and experience in all phases of pilot training gives us confidence that we will be successful in training highly skilled and high volume specialists in low cost, highly effective Manual Small Incision Cataract Surgery (MSICS)” says Jim Ueltschi, “We understand that there are significant differences between pilot and surgical training, but there are many similarities as both are task-oriented. With high fidelity simulators and standardized courseware, we expect to scale up quickly and maintain the highest proficiency standards in MSICS as we have established in aviation.”

HelpMeSee envisions a large system of independent cataract specialists that would be a contrast to the existing hospital-based systems. The independent practitioners would be supported by HelpMeSee and paid a fee for each cataract procedure performed to HelpMeSee quality standards. These independent practitioners, supervised by a regional ophthalmologist, would be more likely to serve in rural areas or smaller urban centers, bringing the service closer to those in need

HelpMeSee sponsored the RAND study to assess the current and projected state of the cataract problem using RAND's sophisticated statistical modeling. Interviews with leaders of the most recognized existing cataract treatment models and other leading experts were conducted in order to compare and contrast their views and experience with the HelpMeSee plan. The analysis also considers a range of potential challenges to the success of the enterprise and discusses how a pilot study can help address some of those challenges.

Accepting the RAND report, Mohan Thazhathu, President and CEO said “RAND’s sophisticated modeling has provided an extensive assessment of the worldwide problem of cataract blindness, strategic challenges that must be addressed, and the milestones that  need to be accomplished”.

The analysis estimates the potential impact of the effort if HelpMeSee is able to train 30,000 eye surgeons as planned. If the project reaches 50 percent of those needing cataract surgeries by 2030, then 82 million people could be aided, including prevention of 13 million cases of blindness. If the effort can reach 80 percent of those who need cataract surgery in developing nations, 113 million cases of vision impairment could be avoided, including 21 million cases of blindness. The biggest impact in terms of absolute numbers would be in Southeast Asia.

RAND researchers estimate the cost per surgery will vary by region and by year. For example, they calculate the costs per surgery in 2017 will range from $69 in Southeast Asia to $138 in Latin America. The estimates are generally higher than other cost estimates for cataract surgery in the medical literature because the estimate includes all program costs as well as the cost of surgical training.

The analysis also found that the surgeries conducted under the HelpMeSee approach would be very cost effective. That calculation reflects the large impact that cataract surgery has on reducing disability.

The sheer number of people who are cataract blind despite the low cost of MSICS is a stark representation of the failure of modern medicine to meet the needs of the poor. Under current circumstances, tens of millions are unnecessarily blinded and over a hundred million needlessly suffer from low vision. The cataract blind must endure terrible suffering on a daily basis and make unbelievable efforts just to obtain an inexpensive surgery that takes five minutes.