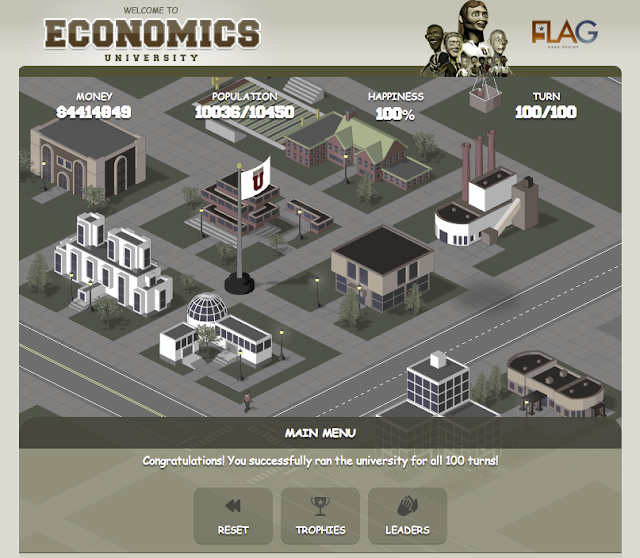 One of the challenges of teaching ECON 102 (Intro to Microeconomics) is finding ways for students to place conceptual knowledge of economics into a context that means something to them (please find also Active Learning With Business Serious Games In Higher Education).

Two Penn State economics professors, Dirk Mateer and Dave Brown, have worked with the Educational Gaming Commons (EGC) to create the "Serious Game" EconU, which is being used for learning core economic concepts and may serve as the capstone project for ECON 102 students.

EconU is designed to provide players with an opportunity to critically think and apply their knowledge of key microeconomic concepts such as elasticity, trade-offs  demand/supply, total revenue, costs, diminishing returns, scale, efficiencies and externalities.

Within the game, players chose everything about their fictional school, from the academic disciplines they support to the price of tuition and everything in between (buildings, student meal plans, student living, assistants hiring and healthcare, among others), managing the campus while learning about economics.

Students get an initial budget and they have to decide which types of dormitories and other college facilities to build. Then there’s a series of unintended events that disrupt the flow of the game and players have to think strategically about which combinations work best with each other.

As stated by Dirk Mateer, they've created a real life experience where players make policy decisions that matter in the context of economics. 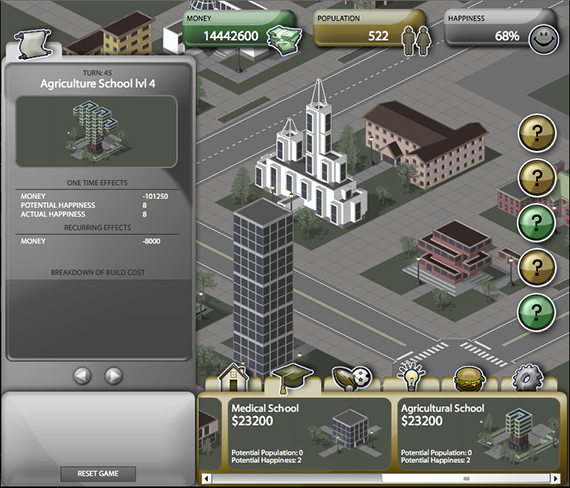 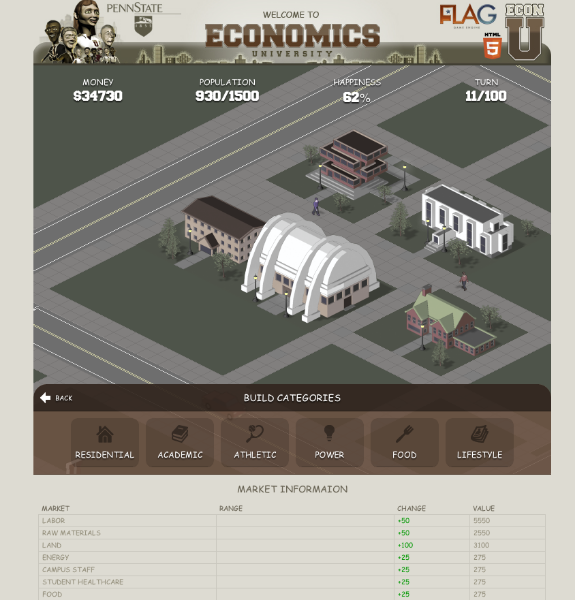 Economic concepts are incorporated into the game throughout. The more students think in economic terms the better they do in the game.

A trial version was tested in Econ 104 Introductory Macroeconomic Analysis and Policy in the summer 2012 and the final version was deployed for classroom use in the fall. It is the most ambitious game development project the EGC has been a part of so far.

EconU was designed as an open-ended experience by Zac Zidik and Chris Stubbs of Penn State’s Educational Gaming Commons in conjunction with Dirk Mateer and Dave Brown from Penn State’s Department of Economics. Zac Zidik, EGC programmer/analyst, developed the Flag Engine that powers the game and can be reused for other games.

“We thought about the game’s mechanics and how they should lend themselves to those learning objectives in a way that feels natural, but also compelling, says Chris Stubbs, manager of the EGC. 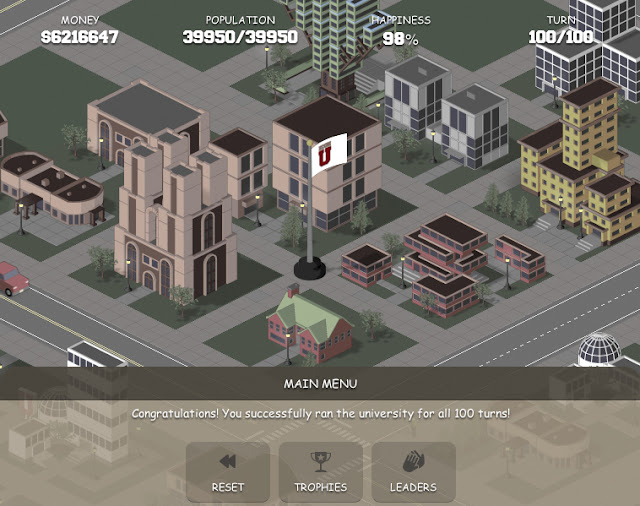 Another interesting aspect of the game was the incorporation of accessibility elements. Elizabeth Pyatt, instructional designer with Teaching and Learning with Technology, helped them focus on accessibility issues and make the game accessible for all.

For more about EconU and educational gaming at Penn State in general, please visit the EGC web site.