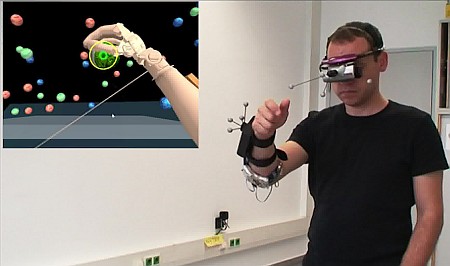 Unity put together a new highlight reel to demonstrate their Serious Games capabilities in celebration of their attendance at this year’s I/ITSEC, early December.

Among the embedded Serious Games clips is the Virtual Prosthesis Trainer (please find also Serious Games Enhancing The Rehabilitation Environment – Update) to help individuals with upper-limb amputations learn how to use their prostheses.

The prosthesis manufacturer Ottobock has teamed up with researchers from the Interactive Media Systems Group at the Vienna University of Technology (TU Vienna), Austria, to develop the virtual reality training environment.

Development of the VR training application, the brainchild of Andrei Ninu, an engineer at Ottobock, and Hannes Kaufmann, PhD, associate professor at TU Vienna, started in spring 2011 by Ninu and Michael Bressler, a TU Vienna master’s student. 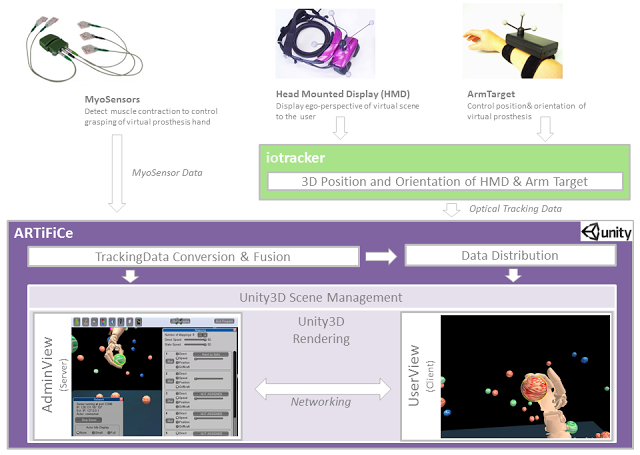 Wearing a VR headset and sensors to track arm movements, users can practice controlling their myoelectric prosthesis without risking damage to themselves or their surroundings. The system uses the iotracker optical motion-capture system with electromyography (EMG) to generate input for grasping control of the virtual prosthesis, creating a realistic simulation. Data from the iotracker and EMG signals are then fed into ARTiFICe, a VR framework for mapping the real world onto virtual objects using the Unity3D game engine. The iotracker and ARTiFICe were developed at TU Vienna.
﻿
﻿The team implemented two mini Serious Games to motivate the patient to practice myoelectric prosthetic control. The first game allows the beginner prosthesis user to practice grasping various shaped object, such as cubes and cylinders.The second game is more advanced; it involves grasping spherical objects with different virtual-hand orientations as well as learning how to adjust grasp force with the myosensors. If the applied grasp force is too strong for the selected sphere, the sphere explodes. The grasped spheres must then be moved into a box. 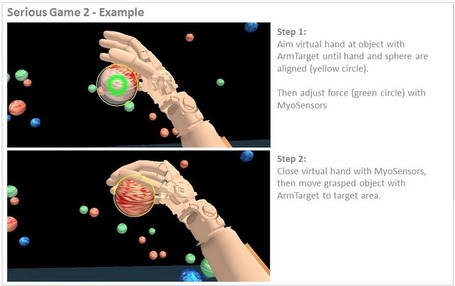 The team plans to implement a more complex Serious Games based on the underlying technology in the next months.

A preliminary study using able-bodied individuals will test the system’s robustness and usability with people who do not have any specific technical background. This will be done in cooperation with the Vienna General Hospital and will be supervised by medical experts. The results will then be used to optimize the system so that it can be used in the future for upper-limb amputee patients. The project roadmap includes tests with amputee patients, but no date has been set.
﻿