Via: TED talk – A Robot That Flies Like A Bird

Plenty of robots can fly -- but none can fly like a real bird. That is, until Markus Fischer and his team at Festo built SmartBird, a large, lightweight robot, modeled on a seagull, that flies by flapping its wings.

SmartBird is the centerpiece of a broader project to build technology that mimics nature. Futuristically named the Bionic Learning Network, the project is a collaboration between Festo and universities that has so far built six different robotic animals.

For the most part, Fischer says, the arduous process of mimicking nature in robotics helps him and other designers think up ways to build lighter weight, more elegant machines - thus working as Serious Games. Once built, the animals themselves are sort of “just for show”. 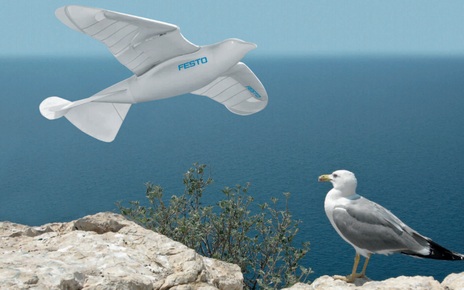 The video shows what appears to be a sort of stiff seagull flying around the conference hall - a kind of like those bald eagle shows at theme parks except for one glaring difference:  Festo's bird is actually a lightweight robot.

Given its instant accessibility to crowds, Fischer's approach to robotics has been featured in exhibitions at New York's MoMA and worldwide.

Festo’s AirJelly wow crowds in Germany. There's also a robotic fish called the "Airacuda." It can swim around a tank on its own and even blows bubbles.The "Festo Aqua Penguin" offers similar functionality, but it looks like a penguin. Remarkably like a penguin, in fact--though the creepy glowing blue eyes give away its robotic secret.