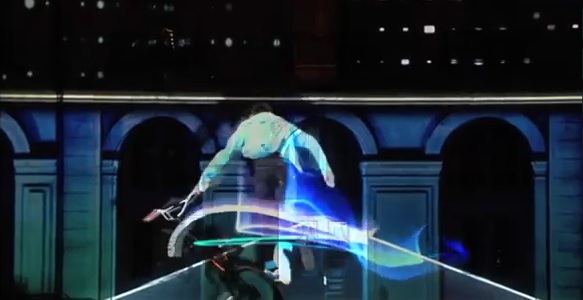 Amazing athletes with some cool hip hop dancers and some celebrities, stunning 3D effects and France. Altogether this was the launch of an Adidas Is All In campaign that took place at Palais du Pharo in Marseille, France where the production literally knocked down the building

On  my prior posts Serious Games Bringing Interactive Properties to Everyday Surfaces and Sifteo - The Next-Gen Siftables: Serious Games As Thinking Toys I had surfaced the theme of physical "Serious Games".

As stated by Expressively Expressive “Projection Mapping has really been a revolutionary new craze for major brands such as Adidas, Samsung, BMW, Toyota, Hot Wheels and Ralph Lauren - all utilizing this technique successfully. Basically 3D Projection Mapping is a projection on a structure or building by some super projectors to give the illusion that the structure is a scene.”

Here is A 3D Projection Mapping Installation for Adidas Is All In campaign that took place at Palais du Pharo in Marseille, France, where amazing effects literally knocked down the building.

The 3D Projection Mapping installation was created to demonstrate Hyundai’s new value proposition - New Thinking. New Possibilities -launching in conjunction with the new Hyundai Accent, where the car has been integrated into the installation.