The Jewel Of The Valleys: Serious Games Centered On The Civil War 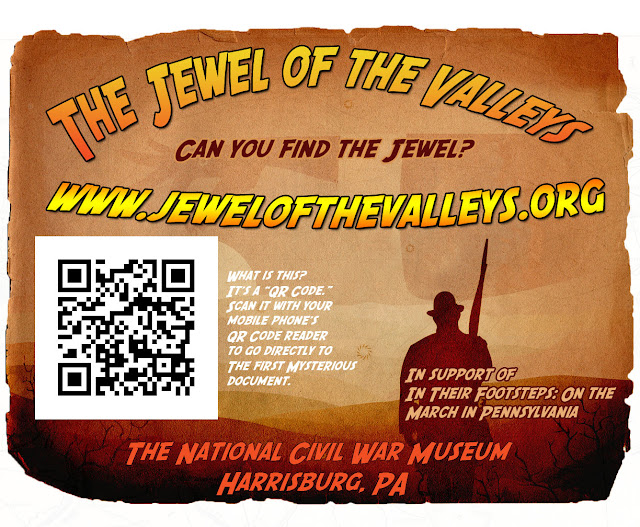 The first clue is here!

The Civil War Augmented Reality Project was conceived by several public educators with technology experience and a desire to offer more interactivity to students and the general public visiting historic sites.

The objective of the project is to develop and implement augmented reality services related to the American Civil War in Pennsylvania, and to modify soon to be released tablet personal computers to allow the general public a chance to experience the applications.

The project’s inception is planned to give ample development time in the run up to the Sesquicentennial of the Civil War, beginning in 2011.

It is hoped that early support could generate interest in Maryland and Virginia. They also propose to construct stationary devices patterned after the “pay binoculars” often found at scenic overlooks. These devices will offer a virtual geographic view from a few hundred yards above the user. Physically swiveling the viewer left and right changes the direction of the view in real time, just as swiveling up and down changes the view. The intuitive nature of the device is intended to invite “non-tech oriented” persons to try the experience, and learn more about AR and the Civil War. They propose that these binoculars be set up at locations across the region touched by fighting in the war. In order to give the user a sense of the historical connections between each location, a nearby screen will project realtime webcam images of people using the devices at other locations.

As a part of The Civil War Augmented Reality Project, an Alternate Reality Games (ARG) was launched o May 15th.

The game, entitled The Jewel of the Valleys is intended for students, classes, teachers, and the general public and being offered by the National Civil War Museum in Harrisburg, PA.

The game will revolve around a mysterious document discovered in the Museum’s vaults, and will prompt students to analyze primary documents, as well as introduce them to Civil War-era communications technology.

The game involves the invasion of Pennsylvania in 1863, but also many of the larger issues and experiences of the war, so it fits well in many curricula, both PA and nationwide.

The Jewel of the Valleys will also coincide with, and intertwine with, Museum Curator Brett Kelley’s incredible march from Fredericksburg, VA to Harrisburg from May 16-30th as a Confederate soldier, following the track of General Ewell’s men as they invaded Pennsylvania in 1863. Kelley’s march will be followed by Hershey High School students in their blog, offering constant updates, videos, and images of Brett’s handwritten journals during the march.

The march and the game are both part of a creative and exciting fundraiser for the Education Department of the National Civil War Museum.

How can you help, get involved, or just have fun?

-Share this post with anyone who may be interested in playing!
-Organize a team of students to participate through the “Jewel of the Valleys” wiki: you can join the wiki, ask for a page just for your team, decorate it, follow the game, brag about achievements, collaborate, etc.
-Offer to students as an after school activity, “club” activity, bellringer, extra credit, or classroom competition.
-Play yourself!

The mysterious document was revealed on May 15th through many outlets, including this blog and many others. On the conclusion of Brett’s march on May 30th, prizes and certificates will be announced for the following:

Despite the prizes, it will honestly be quite fun and educational, as updates and clues will be revealed along the way through various forms of media (including social media), leading the public toward the elusive Jewel of the Valleys.
﻿