Imagine Cup 2011 US Finalists: Serious Games To Change The World 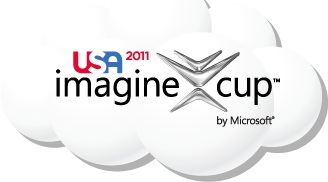 The theme of this year's contest:
Imagine a World where Technology Helps Solve The Toughest Problems

Some of America’s top young minds have tackled the world’s most pressing problems through the use of technology at this year’s Imagine Cup.

Today Microsoft narrowed down the field of 22 Software Design and Game Design finalists to just 12 teams that are still in the running to take home a trophy at the Imagine Cup 2011 U.S. Finals event.

The remaining finalists will have the chance present their world-changing software solutions and Serious Games to the judges tomorrow, Monday, morning at Microsoft Headquarters in Redmond, Washington.The winning Software Design team will go on to represent the U.S. at the Worldwide Imagine Cup Finals in New York City in July.

Details of the 12 Projects can be found, among them a number of Serious Games to change the world, where players take on the role of city planners, help find alternative energy solutions, end poverty through the use of advanced technologies, save the world from a worldwide epidemic, clean up contaminated rivers or end deforestation.

The Imagine Cup is the world’s premier student technology competition that challenges students to build life-changing projects that can ultimately transform the world. Microsoft created the competition nine years ago as a way to highlight and recognize student innovation around the globe, as well as inspire more young minds to study technology. Each year, the projects have become more inspirational and impactful. Students who participate gain real-world skills that help them in school, in their careers or even as they commercialize their projects, all while tackling global problems.

Microsoft Vice President of Developer and Platform Evangelism Mark Hindsbo said that projections show there will be about 1.2 million computer specialist jobs in the United States in 2018. Yet current trends show that the United States has only half the number of college graduates needed to fill those positions. Also, only about 15 percent of U.S. undergraduates are studying science, technology, engineering and math (STEM) compared to two or three times as many in countries such as India and China.