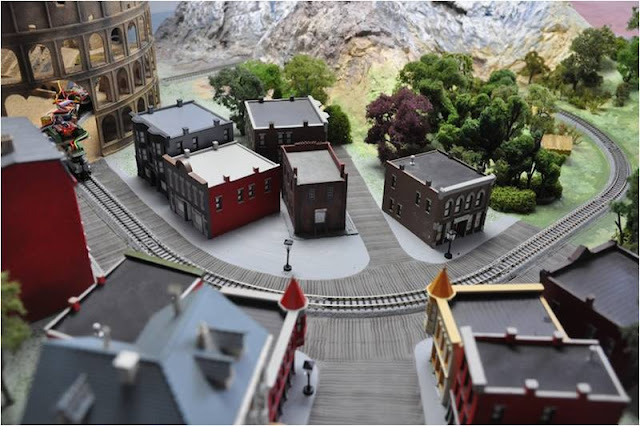 A stop-motion building of the miniature sets

National Geographic, at its core, is dedicated to going out into the world and uncovering amazing new things. It's about putting those new things into a context that helps us better understand our planet, makes us amazed, and stokes our senses of awe and wonderment at the sheer awesomeness of the world we inhabit.

Every year when they put on Expedition Week, all of those things are in the very DNA of the documentaries that they air. This year, in building out the Expedition Week website, they wanted to come up with an experience that would bring alive for visitors the joy of exploring some tiny corner of the real-world, and recreate the excitement of finding something no one else has found before.

The result is Mission Expedition! Serious Game. Take a turn at the helm of a robotic camera-train and drive it through a miniature world that represents the environments from several Expedition Week documentaries. Find tiny artifacts and take just the right picture, and we they mail you the life-size version! It's that simple — go on a miniature adventure into a real-world environment, and you have the chance to return with something amazing, something one-of-a-kind.


Over 200 items are hidden in this tiny world, just waiting to be found. Will you unearth a real-life artifact from ancient Rome? Perhaps you'll discover the 3000 year old scarab-beetle carving from ancient Egypt, or an authentic London newspaper from 1888 reporting on Jack the Ripper. They are all there for the taking... if you can find them!

Beginning Monday, March 28, and continuing through Saturday, April 9, viewers can log on to http://www.natgeotv.com/expedition between the hours of 2 p.m. and 2 a.m. EDT to line up to control the strategically placed state-of-the-art telepresence cameras attached to a moving model train. For up to 60 seconds, each participant will get an individual turn to navigate through miniature sets of a remote Papua New Guinean village populated by cannibals, Victorian London during the time of Jack the Ripper, the Himalayan Mountains where Yeti sightings have been reported and the Roman Coliseum during the gladiator era.

The robotic camera train, which travels on a track that snakes throughout the miniature sets, will allow viewers to drive and participate in a photo safari in search of tiny hidden artifacts within each location for a chance to take home a piece of history. Participants have up to 60 seconds to navigate through the set and take a picture of what they deem the most valuable artifact they encounter. If the captured image turns out to be one of the hidden artifacts of the day, the viewer will be notified and the artifact will be delivered from the Mission Expedition set directly to the viewer’s home. Nearly 200 of the featured miniature artifacts are stand-ins for life-sized items — totaling more than $10K in value — tied to the themes of Expedition Week, including a life-sized inflatable tiger, a replica of an ichthyosaur snout fossil, a copy of an 1888 London newspaper with Jack the Ripper headlines, a 3,000-year-old Egyptian scarab beetle and a bronze bust from ancient Rome. Artifacts will be rotated throughout the set during each live play period.

Built over six weeks by a team of four people from Pittsburgh-based interactive firm Deeplocal, the Expedition Week experience includes a miniature set that reflects microscopic details of the chosen locations to simulate the experience of being in the midst of Victorian London, Papua New Guinea, the Roman Coliseum and the Himalayas. For instance, the handmade huts in Papua New Guinea are modeled after real tribal huts found in the region today and replicate the high poles on which houses are built to avoid insects and flooding.

The transmedia experience of these four miniature sets and the hidden artifacts will also extend to Twitter, where four Expedition Week-inspired characters — a Papua New Guinean cannibal, Jack the Ripper, the Yeti, also known as the abominable snowman and a Roman gladiator— will interact with viewers and engage them in topical conversations related to Expedition Week programs. These Twitter characters will also share insights about the Expedition Week online hub.

Put together by Neo-Pangea, the Expedition Week website will also be home to 50+ exclusive preview video clips, photo galleries, behind-the-scenes stories and facts leading up to the April 3 premiere of Expedition Week, plus the Expedition Granted online contest, in which two National Geographic Young Explorers compete for viewer votes in pursuit of $10K toward the expedition of their choice.

Building on the great success of the first two signature events — critically acclaimed as “must-see TV” and “endlessly entertaining” — 2011 Expedition Week brings viewers to more never-before-seen places, promising one jaw-dropping story after another. With 13 world premieres over seven straight nights, we’ll trek deep into the rain forest in search of tribes practicing cannibalism, go on the trail of the abominable snowman, bring back gladiators from the dead using special forensics, visit a tiger man who has captured an amazing portrait of South African tigers as never seen before … and so much more! The entire week is hosted by the Shark Men as they prepare for the return of their series on Sunday, April 10.

Deeplocal is an innovation studio that helps brands create remarkable experiences that bridge the online and physical worlds. Deeplocal is a Carnegie Mellon University spinout company that has devised and developed cutting-edge marketing concepts for the Tour de France, the World Cup, and for brands like Nike, EA Sports, Volkswagen, GAP and Good Magazine. The company’s campaigns have received numerous awards, including “Top 10 Campaigns of the Digital Decade” by the One Club, “Best of Interactive” by Communication Arts and a Grand Prix at Cannes Lions.

Neo-Pangea is an innovative digital boutique that specializes in digital video production, Web design, 3-D design, interactive experiences and live-environment multimedia. It has created successful promotions for Fortune 100 brands across the globe such as National Geographic Channel, Comcast and Wal-Mart.