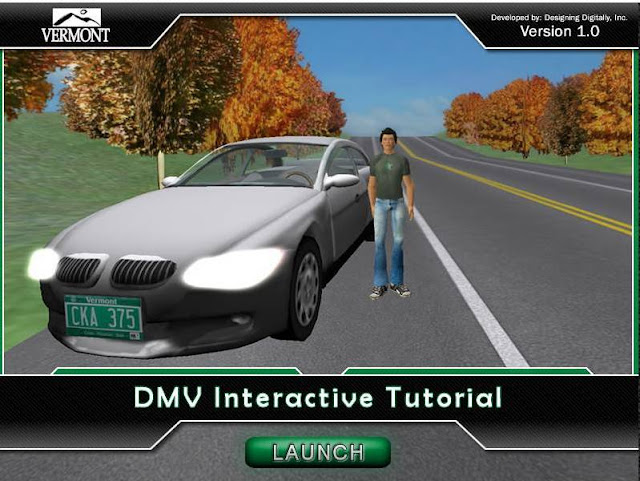 Designing Digitally, Inc. was contracted by the State of Vermont to develop an innovative "Serious Game" for the Vermont DMV named DriveVermont.

This "Serious Game" has been designed to help residents of Vermont learn to drive safely. The user friendly system was developed using a multitude of applications and mediums to form a visually appealing and interactive solution that helps potential drivers learn the rules of the road in Vermont.

The specifications for the project included accessibility features, as well as the ability for users with low bandwidth or lower end computer systems to access the training module.

With this in mind Designing Digitally, Inc. built a Flash based learning tool with text that can be increased in size, as well as audio which narrates all text within the modules. Upon anonymous registration and log-in which allows users to start back where they left off at anytime, users are taken through each lesson where they learn valuable information about the laws of driving. In order to keep the modules from being simply page turning, users are asked scenario based questions throughout the lessons including multiple choice questions, drag and drop, matching, and even controlling a virtual vehicle through a scenario. At the end of all lessons, users take a practice exam which will help prepare them for the actual exam that they will take to receive their driver’s permit. Additionally, users will receive feedback on questions they missed which will direct them to the appropriate section to review.

Not only is the system engaging for students, but is also user friendly for the administrator. The system was developed with a web-based back-end that consists of a content management system. The administrator is able to log into the control panel and move slides around by dragging and dropping those slides in order. The administrator can also edit a slide and swap out text, audio clips, and video clips at any given time. This empowerment allows the State of Vermont to be able to edit the system on their own as the policies and procedures evolve over time.

The start of the project consisted of the development of the storyboard which was based off of Vermont’s 90 page driver’s training manual. Designing Digitally, Inc. decided it was best to create this project using 3D modeling and interactive mediums in order to appeal to the teenage audience that is immersed in the digital realm on a daily basis. Once the manual was converted into an effective storyboard that met each learning objective, the virtual world of Second Life was used to create 3D spaces representing Vermont.

By using Second Life, Designing Digitally, Inc. was able to setup a virtual movie set where virtual actors played out the scenarios within the storyboard and videographers recorded each clip. Sets consisted of rural streets, city streets, and highways, as well as all four seasons and all weather conditions to show each and every aspect of driving in the State of Vermont. 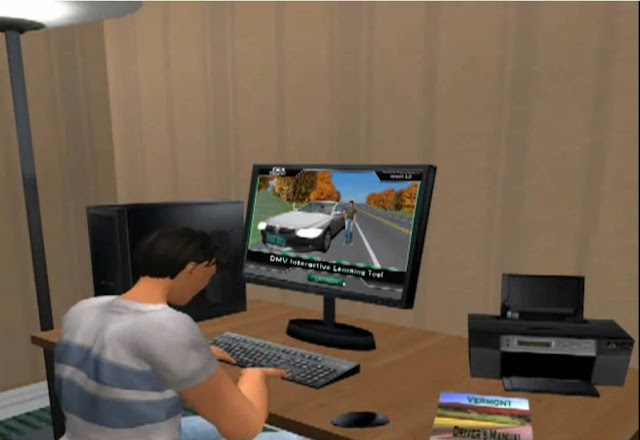 ﻿In total, over 900 video clips were recorded, and those clips were used to create the final Flash animations that are seen in the web-based learning tool.

Designing Digitally, Inc.’s overall goal is to add value to the clients that they serve by helping to create a strong and professional brand image.