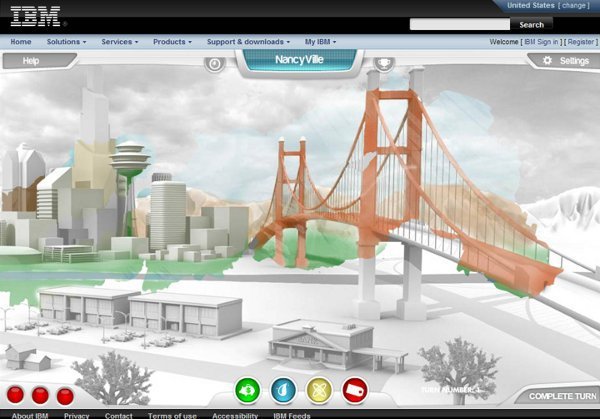 CityOne is a "Serious Game" based on reality. The obstacles are genuine, just like the solutions. Some cities don‘t have enough water. Some can‘t tap into alternative sources of energy. Still others have banks and retail stores that are outmoded, lacking process integration and analytics. How will you solve these and many other real-world business, environmental and logistical problems?


﻿Delivered as a simulation game, players have the opportunity to explore more than 100 real-world scenarios to transform cities through technologies that reduce traffic congestion, save water, streamline supply chains and tap alternative energy sources through a series of crisis scenarios.

In all of the missions, players must determine the best way to balance the city's financial, environmental and sociological interests. They are challenged with improving the city by attaining revenue and profit goals, increasing customer satisfaction, and making the environment greener with a limited budget. 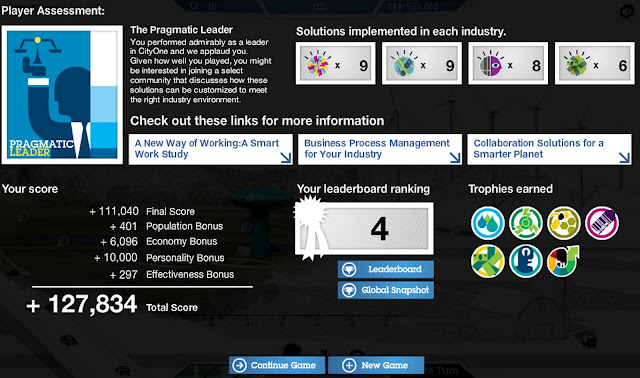 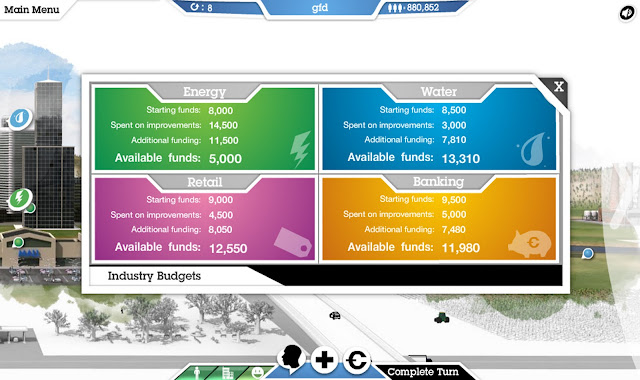 In parallel, players will learn how to embrace technologies such as business process management, service reuse, cloud computing and collaborative technologies to help make organizations in city systems more intelligent. 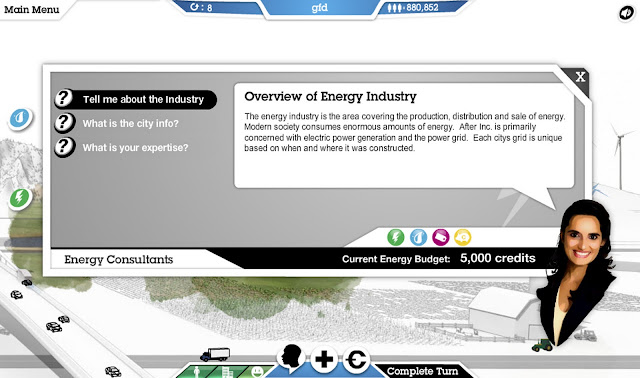 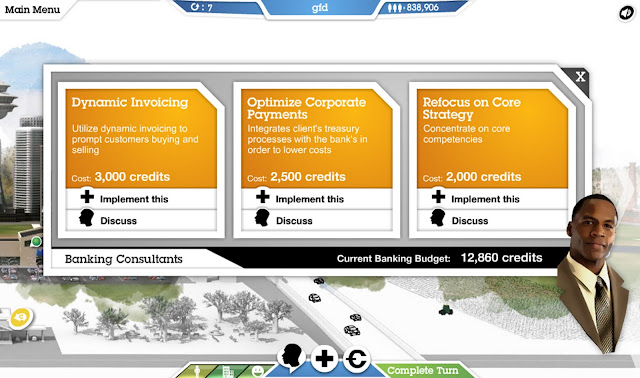 As urban populations continue to grow, civic and business leaders face an unprecedented set of problems. With an estimated one million people around the world moving into cities each week, experts predict the population in the world's cities will double by 2050. Today, these cities consume an estimated 75 percent of the world's energy, emit more than 80 percent of the greenhouse gases, and lose as much as 20 percent of their water supply due to infrastructure leaks. Within these cities, retailers will see global supply chains bloat with $1.2 trillion in excess merchandise, and bankers will see their trading systems subjected to extreme stress, handling more than 25 billion market data messages each day. 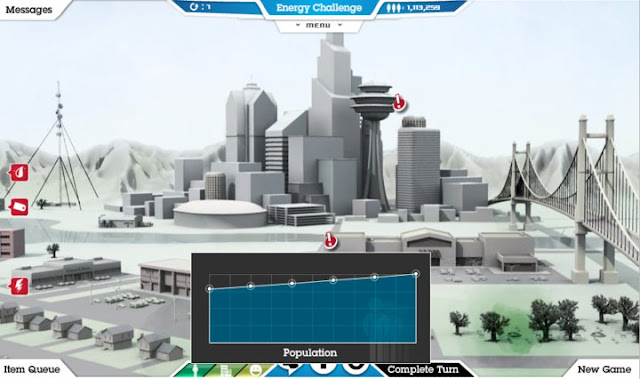 ﻿
City infrastructures that deliver vital services such as transportation, energy and water must rely on a wealth of new information and technologies that will allow them to sense and respond intelligently to the needs of their growing populations and businesses within the cities must learn how to integrate with these new technologies.

For these reasons, IBM's mission is to help cities become more intelligent. CityOne offers a virtual environment that will help tomorrow's leaders learn how to apply advances in technology and better understand how these systems work.

Examples of the game scenarios include:

Water Crisis Management: A city is struggling with water usage increases twice as fast as the population, supplies are becoming strained and possibly polluted, and the municipality is losing almost half of its water through leaky pipes. On top of all that, energy costs continue to rise. To complete the mission, players must come up with a way to deliver the highest water quality at the lowest cost in real-time. 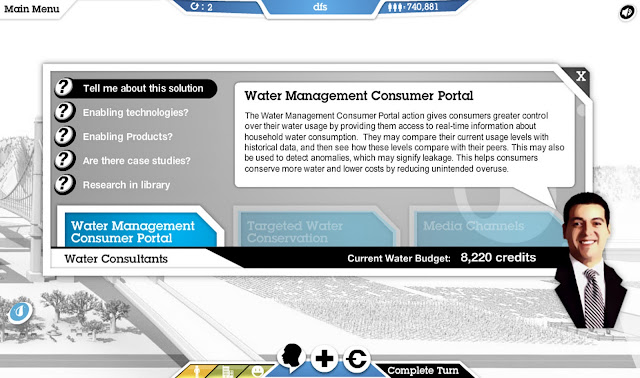 Smarter Retail:  The player represents the owner of an electronics store that requires a redesign and expansion. In order to increase sales, players must streamline and increase the visibility of their supply chain process to better track items in real time and react to problems and delays.

IBM has also linked content from CityOne with cloud-delivered business process management capabilities that allow real-time communication with other players and with IBM industry experts. As a result, a player can have conversations about how the process models from the game relate to real world implementations.

Since plans for the game were announced in May, more than 8,000 people have pre-registered to play CityOne. Additionally, key organizations have worked with IBM to enhance the design of the game. The U.S. Environmental Protection Agency (EPA) provided content and resources to CityOne.

"Creating greater awareness and educating the public about protecting human health and the environment is an EPA priority, and Serious Games can be useful tools for users to learn about processes and systems reflective of the real world," said Andy Miller, PE, Chief, Atmospheric Protection Branch, EPA Research and Development. "By cooperating with IBM CityOne developers, EPA is helping users by allowing them to more thoroughly investigate environmental issues and better understand complex energy and water interactions presented in the game. EPA's collaboration in this project will help increase awareness and understanding of how different choices that are made in the various game scenarios affect environmental outcomes."

IBM is not new to the Serious Games space. Over the years, IBM has released a number of games such as INNOV8, RoboCode and PowerUp that are used by schools, businesses, museums and conferences. In fact, the INNOV8 series is now being used by 1000 universities and organizations worldwide and is offered for free to schools through IBM's Academic Initiative

Historically, simulation gaming has been used extensively in the military, by athletes and by scientists to discover effective new strategies and techniques and develop the skills needed to implement them. Businesses have realized the value of this and are deploying their own games to create life-like simulations of real markets, customers and business situations that they deal with every day.

One of the businesses that piloted INNOV8 is the Farmer's Insurance Group The company's national training facility, The University of Farmers, offers training to tens of thousands of Farmer's employees and used INNOV8 with their call center agents. 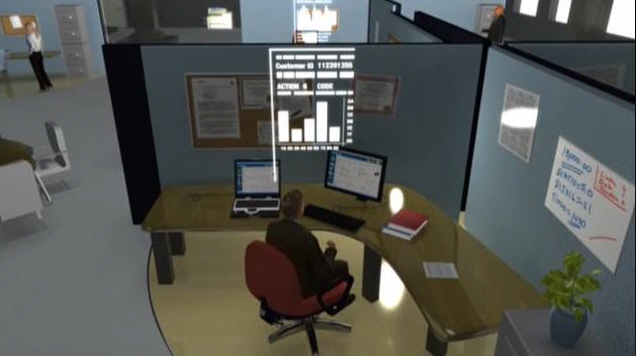 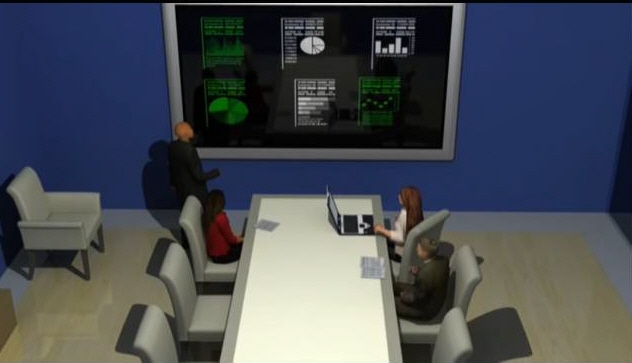 "We see serious gaming as an ideal delivery system for a number of learning opportunities," said Mike Cuffe, VP of Learning at University of Farmers. "Since my team redesigned Farmers Claims' curriculum to give it a learn-by-doing focus, our employees now achieve competence more quickly, serve our customers more effectively and compassionately, and are better prepared for advancement opportunities."