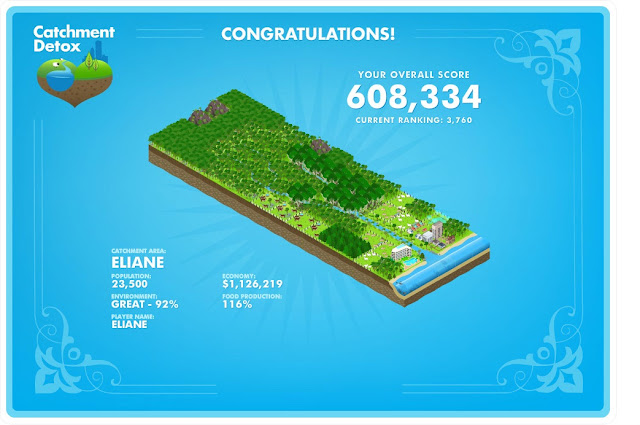 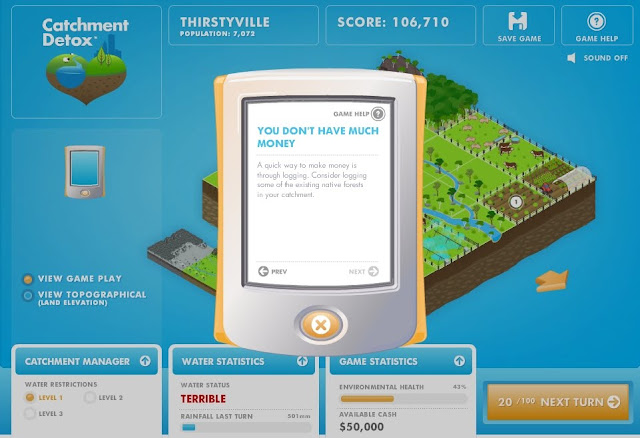 According to the experts that perform a similar juggling act in real life, “the challenge of planning and implementing activities on a catchment scale is a very complex issue, and the game to a large degree picks that up. The wonderful thing about the game is that there's instant feedback about the impact of industries and the cost of removing or changing land uses. In reality it's not so simple.”

Experts’ suggestions for doing well in the game, and in real-life catchment management as well are to keep that need to balance industry and ecology in mind, and to move industries away from the edges of watercourses. 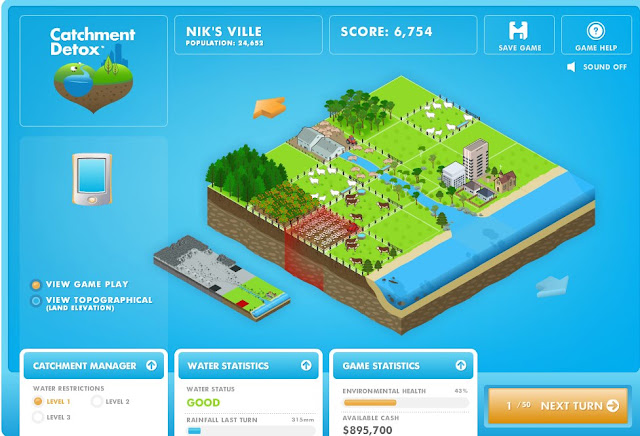 In 100 turns, you decide how and where to plant crops, when and where to log forests, where and when to build factories or set up national parks.
Keep your eye on the impact stats to compare the economic and environmental pros and cons of your decisions.
Some activities bring in more money, but use a lot of water; others bring environmental benefits, but not much income. You can add or remove as many activities as you like (until you run out of money and/or turns!)
Catchment Fact Sheet – A System in Balance
The catchment of a river is the area of land that water falls on to feed that river. Every area of land on the planet is part of a catchment. As water moves over the land, it finds its way into streams and down into the soil, eventually feeding the river. Some water remains underground and this slowly recharges the river even when there is no rainfall. Not all catchments feed rivers that flow to the sea. Some are the source of rivers which flow inland, ending in a dry lake or wetland.
Every one of us lives in a catchment. Look at a map or street directory of your area and find the nearest stream, creek or river. If you are in the city it may now be just a drain or even a pipe under the ground.
The concept of a catchment is useful, because it is the scale on which many parts of the landscape work. The soil, plants, animals and water all function together in a catchment – anything that affects one of these will also have an impact on the others. The health of our catchments is vital for human existence because they are where all food is grown. The water you drink comes from a catchment near you. The oxygen you breathe comes ultimately from a growing green plant or algae. So catchments are part of our life support systems, and support the lives of all plants and animals.
In 2002, an assessment was made of the overall health of Australia’s more intensively used catchments.
The assessment looked at land, water and biodiversity in each catchment, including problems such as salinity, erosion, sedimentation, pesticide use, pollution, roads, native tree-cover, human population and pests.
The survey, done by the National Land and Water Resources Audit, found that the condition of 70% of Australia’s most populated catchments is merely average or worse than average.

Over the last 200 years people have been busy clearing land for farming, mining, building towns and cities and changing catchments which had been in equilibrium for thousands of years.

One reason they are so damaged is because we have not understood that changing something in one part of a catchment can have a huge impact somewhere else.

Catchments will benefit from a more integrated approach to management: where the impact of all activities – farming, development, tourism, and so on – are considered as part of the entire landscape and can be done in greater sympathy with the natural plant, animal, soil and water assets of the catchment. 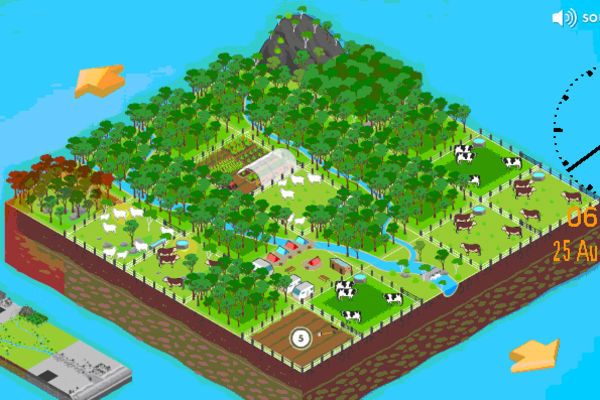 Catchment Detox is a major initiative by the ABC (Australian Broadcasting Corporation) and its partners to help Australians better understand and manage the environment they live in.

The free online game begins with a catchment in critical condition and through virtual years, decisions must be made on how to restore and sustain it, balancing three basic factors: the health of the environment, the economy and population growth.

The radio series broadcast over a two week period, coincided with a competition where the top player would win a trip for two to one of Australia's most pristine catchments - Lake Argyle in the Kimberleys. A special school prize was also available for school groups who registered.

Catchment Detox is an ABC initiative in partnership with eWater, the CSIRO, the Department of Innovation, Industry, Science and Research and National Science week. Catchment Detox is based on an original idea by Natural Resource Management advisor Tim Stubbs and consultant Lucy Broad.