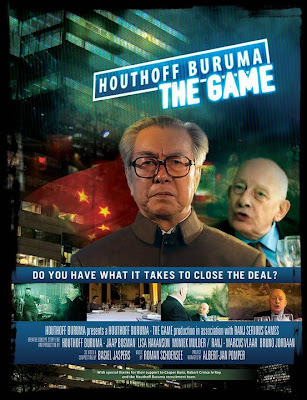 Houthoff Buruma - The Game is a "Serious Game", developed by Dutch law firm Houthoff Buruma and Ranj Serious Games. In this game, designed for recruitment purposes, talented law graduates are challenged to display their skills.

Houthoff Buruma - The Game was introduced at the World Expo 2010 held in Shanghai as an example of the Netherlands Serious Games best practices.

The growing importance of Serious Games for business purposes is demonstrated by the Dutch government's investment in the GATE Project (Game Research for Training and Entertainment). Ranj Serious Games is one of the advisory board members for this project.


Houthoff Buruma is a game built for recruitment purposes in the legal sector. The premise is a fictional take-over deal of a Dutch family company by a Chinese state owned enterprise.

Players work for Houthoff Buruma, the legal representatives of this Chinese company. They have 90 minutes to convince enough shareholders of the target company to sell their shares and to come up with solutions to hidden problems. In this time they will be confronted with video & text chats, films, mails, news, websites, social media and more.

The player represents China Mining & Marine, a demanding and unforgiving client. To meet the unprecedented goals of The People's Republic of China, this state-owned giant has to construct the Panlong Renewable Energy Park within an ambitious time frame.

To succeed in completing the task in such a short time, China Mining & Marine needs six specific vessels equipped with a unique installation technology. However, these six vessels are all in the hands of one company:‘t Hoen Marine & Offshore, a century-old Dutch family business that also possesses the latest technology and the essential know-how.

The Panlong Renewable Energy Park has become a matter of prestige for China, so failure is not an option. China Mining & Marine needs those six vessels as soon as possible and is determined to acquire 't Hoen. What will it take to motivate the members of the 't Hoen family to sell their shares? Nothing is what it seems and everyone has its own interest to protect. And this is a family company with skeletons in the closet.

The students will play in up to five teams, with up to five players in each team, and the teams will be competing against each other in each session. The players have 90 minutes to convince enough shareholders to sell their shares and to draft a 'Letter of Intent'. In this time they will be confronted with information of all kinds: video chats, text chats, conference calls, e-mails, websites, Facebook pages and YouTube movies.

Houthoff Buruma is a game to be used by law firms in the recruitment and selection of aspiring lawyers. In the game, lawyers should not only apply legal rules and regulations, but also show how they handle a complex case. The law firm Houthoff Buruma in Amsterdam saw the usefulness of Serious Games and sponsored the development. "Law firms are generally more conservative, "says creative director Marcus Vlaar . "But Houthoff Buruma dared to”.

As well as being integrated into the firm’s permanent training program, clients will also be given the opportunity to play the game that simulates the takeover of a Dutch offshore company to get a better insight at the specific requirements of the modern lawyer.

With over 300 legal professionals, Houthoff Buruma is one of the leading law firms in the Netherlands.