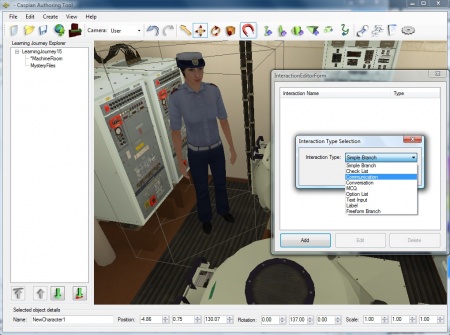 "Serious Games" Design and Technology Company, Caspian Learning, today showed their support for the Iowa State University’s Game Development Competition by announcing that they will supply ISU students with extended trial licences to their "Serious Games" Engine and Authoring Tool, Thinking Worlds, for the duration of the competition.

The Motorola Foundation, in association with the Innovation Generation program, has awarded a $50,000 grant to Iowa State University to fund a games development competition that encourages students to create video games and educational training applications.

Headed by ISU associate professor of integrated studio arts Anson Call and computer science lecturer Chris Johnson, the contest requires students to form teams of three members. Each team must include a designer, a programmer, and a business manager.

Each team will battle it out in one of three categories: serious games, PC/console games, and mobile games. The winning entries in each category, as judged by a guest professional game developer, will receive a top prize of $10,000.

To help support those students who want to get involved but perhaps don’t have the technical skills necessary, the company behind the award-winning Thinking Worlds rapid 3D games design tool, Caspian Learning, has announced their support for the competition by offering students at ISU free, extended trial licences to Thinking Worlds for the duration of the competition.

Caspian Learning’s Marketing Executive, Lee Rushworth said “the competition is a fantastic opportunity for budding game developers to get some real experience in games design with some real rewards and if our software can help more students get involved in this then we are absolutely delighted with that.”

Anson Call, Professor of Integrated Studio Arts and organizer of the competition said "Students are already doing game design in their spare time and not earning academic credit for it. The interest is there. We just need to provide the opportunity and the Innovation Generation grant is a perfect way to do that."

The competition officially began on September 8th and final judging and a public exhibition of the finalists’ games will be held at the end of ISU's spring semester.

Anyone can download a free 30 day trial of Thinking Worlds but students of the ISU taking part in the competition are asked to make contact with Professor Call to claim their free, extended licence.

The 2010-2011 Iowa State University Game Development Competition offers students a chance to put creativity, technical knack, and business sense together into creating a complete digital game. Teams enter their games into one of three categories: PC/console, mobile/browser, or serious. At the end of the academic year, in spring 2011, teams will present their games in person to a panel of judges who will choose the top three games in each category. Cash prizes are awarded.

Caspian Learning was founded in 2002 and is Europe’s leading developer of immersive learning simulations and serious games for performance and training. Their award-winning 3D authoring tool, Thinking Worlds, is a globally unique software application that allows instructional designers to create fully immersive 3D simulations at costs previously restricted to 2D development. Caspian Learning has worked with clients such as IBM, BBC, QinetiQ, Volvo, The Ministry of Defence and the European Union.

Highlight: Students will be invited to form teams of three or more members from different majors. Each team will act as a startup game development company, drawing on their experiences in such areas as art, psychology, marketing, programming and project management to build and sell games. They will focus on games in one of three categories: PC/console, mobile and Serious Games.

AMES, Iowa - The Iowa State University College of Design and Department of Computer Science will use a $50,000 grant from the Motorola Foundation to host a yearlong game development competition for ISU students majoring in design, technology, communication and business disciplines.

Chris Johnson "I see a significant number of my students with interests beyond the technical," said Johnson, who teaches first-year computer programming. "Many are musical, many are artists, many love to write. When Anson suggested we put on a game competition to break down the walls between our respective academic programs, I jumped at the idea."

"Students are already doing game design in their spare time and not earning academic credit for it," said Call, an avid gamer who teaches digital media and animation courses in the College of Design.

"The interest is there. We just need to provide the opportunity. The Innovation Generation grant is a perfect way to do that," Call said.

Anson Call Students will be invited to form teams of three or more members from different majors. Each team will act as a startup game development company, drawing on their experiences in such areas as art, psychology, marketing, programming and project management to build and sell games. They will focus on games in one of three categories: PC/console, mobile and Serious Games.

"Traditional gamers may want to write their own Xbox 360 game using Microsoft's XNA Game Studio," Johnson said. "Android and iPhone present new opportunities and challenges for those interested in mobile applications. While technically no different, Serious Games are games that educate or train, which might be more motivating to others."

Beginning in September, interested students will meet with Call, Johnson and other faculty to go over the competition rules and expectations, and participate in workshops on the design, programming and business aspects of the contest. Other communication will take place via the competition website, which will be online by September.

Call and Johnson anticipate that students will focus on research and team building in the fall, while teams will actually develop their games during the spring. They will then present their work to a panel of game developers from the industry. Winners will be selected and cash prizes awarded to the top three entries in each category.

The competition will be announced to students at the beginning of fall semester via publications such as the Iowa State Daily and Toons, as well as learning communities and other campus networks.

"We're excited because we see such great potential for this campus to do game design in a collaborative way," Call said.

The Motorola Foundation is the charitable and philanthropic arm of Motorola. The foundation focuses its funding on education, especially science, technology, engineering and math programming. Since 2007, more than $20.5 million has been awarded to STEM programs through Innovation Generation funding.