Montpellier, 7 July 2010 - IDATE has released its Serious Game Market Report which provides in-depth analysis on the different markets, and their growth outlook up to 2015. The top Serious Games Market players are profiled, along with the sector’s latest trends.

“This report provides readers with a comprehensive portrait of the Serious Games market through an analysis of its impact on the video game industry’s value chain, and by examining a series of business models,” explains Laurent Michaud, Head of IDATE’s Digital Home Entertainment Unit.

“Up until now, Serious Games have been designed to be played on a computer, but mobile handsets are already much more widely used in emerging economies which makes them the platform of choice for the development of Serious Games.”

The Serious Games sector is expected to grow significantly in the medium term. IDATE estimates that it currently generates 1.5 billion EUR in revenue around the globe, and that by 2015 sales will be almost seven times what they are in 2010 – with an average annual growth rate of 47% between 2010 and 2015. Plus, we can expect to see the business world’s interest in Serious Games increase around 2013, and especially small and medium enterprises (SME) whose awareness of these tools is still rather limited. 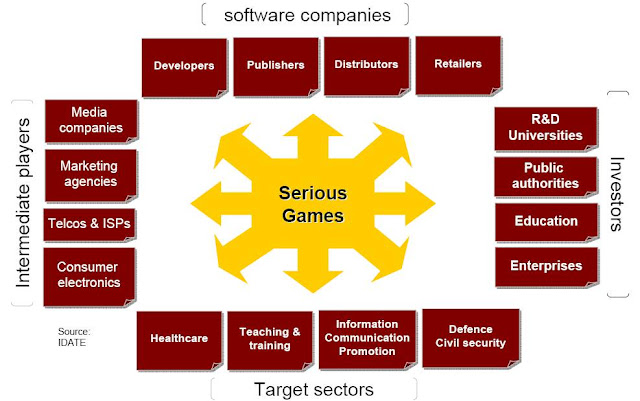 The value chain for Serious Games has fewer links than the classic video game chain. The most common structure is a single player that handles the development, publication, distribution and sales of its games. A great many players actually publish only a single title whose sales and installation/implementation for customers occupy its entire sales and support staff.

Low-end instruments are the most widely used development tools in the sector today, as they are the only ones that most developers can afford – with high-end gaming engines costing in excess of 250,000 USD. At this stage in the Serious Gaming sector’s development, the value chain is more software and service-centric than device-centric.

Here, most Serious Games are designed to be played on a computer, and few have been developed for other platforms. The mobile phone is still the device that currently offers the most interesting alternative to the PC, and it is also the platform of choice for the development of Serious Games in emerging economies where people can get hold of a mobile much more easily than a computer.

Serious Gaming software is still more important than any service that might be associated with it. In other words, the most common configuration is a user playing the game alone and usually locally, as opposed to online.

But Serious Games are not meant to replace existing forms of information, communication or training, but rather to flesh them out and enhance them with interactivity, GUI and a video game’s ability to plunge the user into an environment where she will be more receptive to the message being transmitted. Plus the social aspect of a Serious Game, which fits naturally with a multi-user or even a massively multiplayer approach, will be the prime areas of focus in the coming years, for both the “player” of the game and the professional using it as a tool.

As a result, Serious Games cannot do away with:

• professional support for the game;
• an associated service (aside from management of the application and its functionalities in software-as-a-service mode) which:

- trains future users of the Serious Game, whether they are professionals, citizens, consumers or students;
- regularly tailors the application to the situation;
- configures the game, possibly remotely, according to the targeted users, patient, citizen or learner/student;
- collects the results from use of the serious game, interprets them, shares them and injects them back into the gameplay to help the player progress. 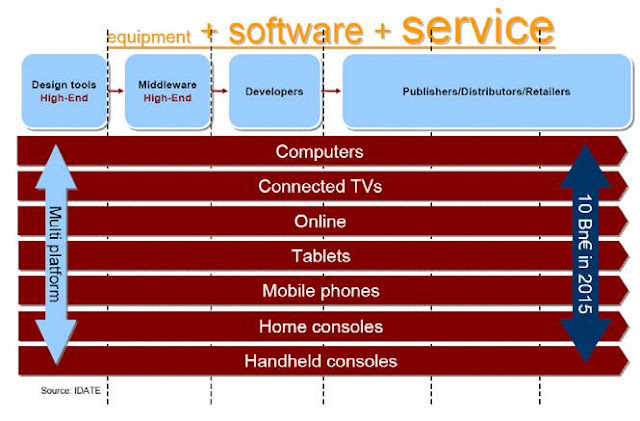 “Serious Games” (Market & Data Report, July 2010)
This report analyses the different serious gaming markets, drawing on a systematic examination of the technologies, usage and the professions involved, providing details on the key stages of design, development and distribution:
• Analysis of the long-term development of the use of Serious Games and the industry as a whole;
• Segmentation by market: Teaching & Training, Defence and Public Safety, Healthcare and Information;
• 50 business models;
• Market figures 2010-2015.

Founded in 1977, IDATE is one of Europe’s foremost market analysis and consulting firms, whose mission is to provide assistance in strategic decision-making for its clients in the Telecom, Internet and Media industries, through the following two areas of activity: Consulting & Research (an independent consultancy and publication f a catalogue of market reports) and the DigiWorld Programme (a member-supported annual programme DigiWorld Club, DigiWorld Summit, DigiWorld Yearbook Communications & Strategies…).

IDATE has developed its media analysis expertise (TV, Internet and digital content) and has become a preferred consultant for media companies, a key interlocutor for public policy-makers and an advisor to equipment maufacturers and telecom carriers the world over.