By Eliane Alhadeff June 12, 2010
A Planet in Peril: Plagiarism was voted as the winning entry 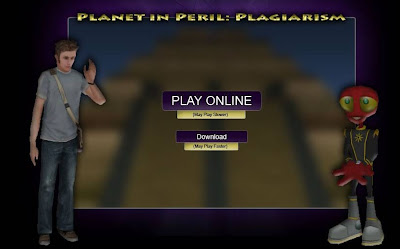 Entries from all around the world were submitted to Caspian Learning’s Serious Games Challenge and yesterday they could finally announce the winners.

The company behind the award-winning 3D authoring tool, Thinking Worlds, yesterday announced the winners of its Serious Games Challenge.

Caspian Learning, the UK-based performance simulation and Serious Games experts, launched the
challenge at the recent Game Based Learning conference in London and opened it up to all users of its Thinking Worlds technology.

The company challenged both novice and expert users alike to create the most innovative Serious Game in just 30 days. The entries were whittled down to two finalists whose games were selected based on how well the entrant used Thinking Worlds innovatively to create a game with a good storyline and good use of learning interactions within it.

Lee Rushworth, Marketing Executive for Caspian Learning, announced that A Planet in Peril: Plagiarism was voted as the winning entry by experienced instructional designers at the company. The game was developed by a small group of Communications Media and Instructional Technology doctoral students (who jokingly refer to themselves as Random Precision Studios) from the Indiana University of Pennsylvania (IUP).

Mr Rushworth said: “All of the entries we received were of a very good standard, considering that no training had been given to the entrants, but there were one or two that stood out above the others.”

“A Planet in Peril: Plagiarism was one that really stood out to us as a well-produced Serious Game built with a great sense of humour and some innovative uses of Thinking Worlds interactions that even we hadn’t thought of.”

The game, which is currently in a beta release, follows the story of a student who uncovers the secret of a group of aliens, disguised as academics, at his university campus. The aliens have prophesied the end of the world, which is set to occur due to a student’s excessive plagiarism, and it’s up to the hero to put the pieces of this puzzle together in order to prevent disaster. While working through the challenges players learn about what is, and what is not plagiarism, including ways to avoid it.

The game is targeted at the college and university level but has application for high school students. The final version of the game will be released in the fall.

The idea was pure serendipity... and a little luck. Ryan L. Sittler, Assistant Professor of Library Services at the California University of Pennsylvania (and one of the lead designers for “Random Precision Studios”) said: “I am working on my PhD at IUP and am an avid game player. My State-System colleague, Dr. Kelly Heider, suggested that I create an information literacy game. I knew I could never do it on my own, so I asked some other doctoral students to help get it off the ground. Fortunately, they were interested! It was in our initial conversations that we settled on one information literacy concept – plagiarism – and developed the ridiculous end-of-the-world scenario.”

This team included Chad Sherman and David P. Keppel as the other lead designers (handling the majority of game production) and Dana Covitz Hackley, Chrissy Schaeffer, and Laurie A. Grosik assisting with pre-production and documenting the process for a potential future publication.

After developing the initial concept, David worked on creating custom objects and environments for the game. “Objects can be scaled in size, but environments cannot be. I had to spend a little time tweaking and resizing the original models until I got the scale right. Luckily, this was easy to do using Caspian tools.” After this, it was up to the designers to find a way to make all of the ideas actually work. Chad took the unusual story and turned it into a playable game. He found that, while there were minor problems related to learning the program, Thinking Worlds allowed for just about anything to be developed. “We had some small issues with characters not following a spline properly. Fixing it really just required us to change the starting or ending points. Most of our difficulties came from inexperience with the software and not knowing if it had any limitations; we basically had to teach ourselves how to use it but it also freed us to be creative and think outside of the box.”

Caspian Learning is committed to making the creation of 3D performance simulations and Serious Games more accessible to traditional learning and development providers.

If you would like to contact any of the IUP Communications Media and Instructional Technology doctoral students that worked on this project, or have feedback about the game (including bugs!), please email Ryan L. Sittler at rlsittler@aol.com

Founded in 2002 , Caspian Learning is the developer of the award-winning 3D authoring tool Thinking Worlds. Caspian Learning’s Thinking Worlds uses globally unique technology that allows instructional designers to create fully immersive 3D simulations at costs previously restricted to 2D development. By utilizing Thinking Worlds, Caspian has positioned itself as the global leader in the use of 3D games and simulations technology within learning, having developed over 50 applications for clients such as IBM, BBC, QinetiQ, Volvo, the Ministry for Defense and the European Union.