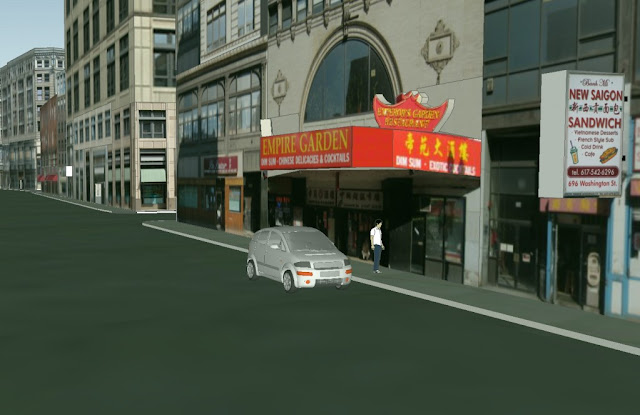 NEWBURYPORT — Just because community meetings are serious business doesn’t mean they can’t be fun, too. A new project in Boston’s Chinatown proves just that – by combining games, virtual interaction, and physical deliberation to help residents better shape the future of their neighborhood.

“We are passionate about the belief that gaming is a great medium to reach multiple generations, with a tremendous opportunity to enhance the way people interact,” said David Martz, vice president at Muzzy Lane. “Well-designed games can be a powerful means for communication, persuasion, and teaching. Why not use them for positive change as well as for fun?”

Participatory Chinatown runs on Muzzy Lane ’s “Sandstone” platform, which allows the game to be played on locally-networked computers for community meetings or directly from the web, so residents can continue the experience at home.

The game asks players to complete “quests” as virtual residents, allowing them to walk the neighborhood streets in someone else’s shoes.

“Residents were thrilled to discover their favorite hang-out spots or even their homes in the game,” said Janelle Chan, Acting Executive Director of ACDC. “Cheers broke out after residents received the results of their deliberation. I don’t remember ever seeing or hearing that at a community meeting.”

In most communities, including Chinatown, attracting younger residents to planning meetings has been a challenge. Participatory Chinatown attracted an audience with an average age of 30.

“Our hope is that when people have a collective experience through the video game, and then talk about it, they’ll gain a better understanding of the complexities of Chinatown, and then they can plan together for the future of their area,” said Holly St. Clair, Director of Data Services for MAPC.

“This is a great example of the positive potential of immersive games. Computers are allowing people to become active participants thanks to software like Participatory Chinatown,” said Bert Snow, Vice President of Design for Muzzy Lane Software. “Developing this project has been an interesting challenge, and it’s a good fit for our Sandstone game platform, which was built with this kind of serious-game project in mind.”

Muzzy Lane led the Participatory Chinatown team as they traveled to Washington, D.C. on Wednesday, May 12, 2010, to present the project to senior White House Staff in conjunction with National Lab Day, an Obama Administration initiative to bring hands-on learning into the science classroom.

The results of the community meetings will feed into the 2010 Chinatown Master Plan. The project is funded by a grant from the MacArthur Foundation's Digital Media and Learning Competition.

Muzzy Lane Software is an innovative developer of 3D single and multiplayer games. Based in Newburyport, Mass, the company creates its own branded games and works with partners to produce private-label games based on the company’s Sandstone platform. Sandstone delivers true 3D games in the browser, as a web service, with tight integration between the games and the web. Muzzy Lane provides simple web tools that support the customization of Sandstone games. For more information, visit http://www.muzzylane.com/

Emerson College is the only comprehensive college or university in America dedicated exclusively to communication and the arts in a liberal arts context. It is internationally recognized for excellence in its fields of specialization, which are communication, marketing, communication sciences and disorders, journalism, the performing arts, the visual and media arts, and writing literature and publishing.

The Metropolitan Area Planning Council is a regional planning agency serving the people who live and work in Metropolitan Boston. An independent state agency, MAPC’s mission is to promote smart growth and regional collaboration. MAPC is guided by its regional plan, “MetroFuture,” which engages the public in stewarding the region’s future.