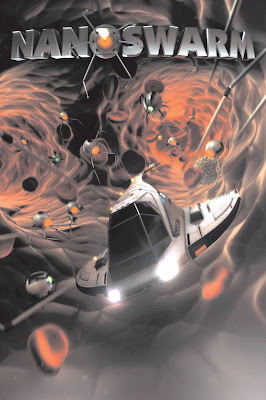 HOUSTON (April 5, 2010) -- NANOSWARM: Invasion From Inner Space was one of the first books available on the iBookstore during Apple’s iPad Easter launch weekend. The novel is based on a Serious Game of the same name funded by the National Institute of Diabetes and Digestive and Kidney Diseases of the National Institutes of Health. Both the book and video game target childhood obesity prevention. According to the United Nations World Health Organization, diseases associated with obesity are the greatest public health problem facing most countries.

NANOSWARM’s story is set in the year 2030 — a time when there is no war, no crime and no hunger. The reader meets five teenagers interning at MECHS, the world’s leading research center. Each struggles with MECHS’ stringent diet and exercise requirements. Scientists there are on the verge of eradicating all disease when a mysterious infection becomes an epidemic. After one of the interns is stricken, the other teens pilot a miniaturized vessel inside his body to discover the source of outbreak.

The NANOSWARM book and Serious Game were developed by Archimage, a Houston based design firm, and Baylor College of Medicine. Results from a Baylor clinical trial showed that children who played the NANOSWARM video game increased their fruit and vegetable intake by a full serving a day and were more physically active than those that visiting traditional health websites for kids.

“This is as large an increase in fruit and vegetable intake as appears in the dietary change intervention literature,” says Tom Baranowski, PhD, Professor of Pediatrics (Behavioral Nutrition) at Baylor College of Medicine. “By middle or junior high school, children are starting to develop their own diet and exercise behaviors. The lifestyle they choose carries on to adulthood. Unfortunately, overweight children are much more likely to become overweight or obese adults.“

Obesity is now the leading causes of preventable death in the United States, exceeding even tobacco. The NANOSWARM book, Serious Game and classroom curricula are designed as unique approaches to healthy diet and exercise behavior change. Scientific collaborators for the NANOSWARM Serious Game include the USDA/ARS Children's Nutrition Research Center, a cooperative venture between Baylor College of Medicine, Texas Children's Hospital and the U.S. Department of Agriculture/Agricultural Research Service.