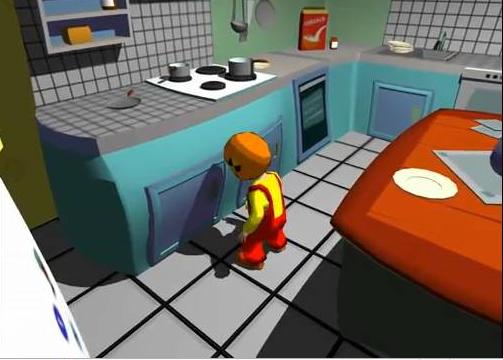 On the occasion of the Laval Virtual trade show, I-Maginer will release a new application demo : Kid Kitchen, a serious game on home safety for children in the kitchen aimed for young parents.

Based on a universe inspired by cartoon, Kid Kitchen includes the concept of crash test applied humorously to the child in the kitchen (test different hazards situation).

The scenario is based on both the dangers of kitchen for children and the world of crash testing, thus, the camera, tinted windows, adapted logos, will be part of the decor. The game takes place at several stages:

• Preparation of the room by the parent. Using cameras, he/she will place the appropriate tools to secure his/her environment.

• Opening a door, which lets the child, equipped with his crash test helmet, enter.

• Child’s walking in the area of the kitchen, monitoring the child is done by an automatic change of cameras to the best viewing angle.

• The child tries every means possible to hurt himself and test the security of the kitchen. If successful:

• The view changes to the cameras that show a predefined cinematic / animation, in which an accident happens to the child.

• The animation freezes on the injured (or weeping) child and displays a small message explaining the behavior (preventive or curative) to have this type of situation. The message needs to be checked to disappear.

• After having finished his tour, a small animation starts (depending on the number of errors found), then the child is released.

This new application uses the latest version of OpenSpace 3D, an open source user friendly platform for the development of interactive 3D environments.