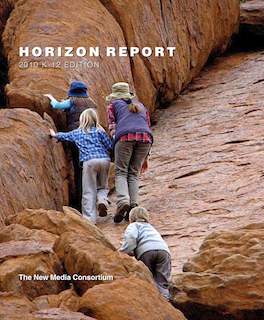 The Horizon Report series is the most visible outcome of the New Media Consortium’s Horizon Project, an ongoing research effort established in 2002 that identifies and describes emerging technologies likely to have a large impact on teaching, learning, research, or creative expression within education around the globe.

This volume, the 2010 Horizon Report: K-12 Edition, examines emerging technologies for their potential impact on and use in teaching, learning, and creative expression within the environment of pre-college education.

Each edition of the Horizon Report introduces six emerging technologies or practices that are likely to enter mainstream use in the educational community within three adoption horizons over the next one to five years. Each report also presents critical trends and challenges that will affect teaching and learning over the same time frame.

The six technologies featured in each Horizon Report are placed along three adoption horizons that indicate likely time frames for their entrance into mainstream use for teaching, learning, or creative applications in the K-12 environment.

The interest in game-based learning has accelerated considerably in recent years, driven by clear successes in military and industrial training as well as by emerging research into the cognitive benefits of game play.

Developers and researchers are working in every area of game-based learning, including games that are goal-oriented; social game environments; non-digital games that are easy to construct and play; games developed expressly for education; and commercial games that lend themselves to refining team and group skills. At the low end of game technology, there are literally thousands of ways games can be — and are already being — applied in learning contexts. More complex approaches like role-playing, collaborative problem solving, and other forms of simulated experiences have broad applicability across a wide range of disciplines, and are beginning to be explored in more classrooms.

According to the report game-based learning is an expansive category, ranging from simple paper-and-pencil games like word searches all the way up to complex, massively multiplayer online (MMO) and role-playing games. Educational games can be broadly grouped into three categories: games that are not digital; games that are digital, but that are not collaborative; and collaborative digital games. The first category includes many games already common in classrooms as supplemental learning tools. Digital games include games designed for computers, for console systems like the Nintendo Wii, and online games accessed either through a special game client (like IBM’s Power Up) or through a web interface like Whyville.

The three most recent cohorts of kids - those born in the early 1980s, the early 1990s, and the early 2000s - define our school populations, and throughout their lives, they have always been immersed in the culture of digital games; it is like the air they breathe.

Games are a natural way to reach young people today, and a great deal more is now known about how to develop good games both for entertainment and for education.

Research and experience are starting to show that games can clearly be applied very effectively in many learning contexts. Games can engage learners in ways other tools and approaches cannot, and their value for learning has been established through research. We know more about how games work and how to apply them to teaching and learning than we ever have, and that understanding is increasing.

Education in general is still a few years away from embracing games as mainstream practice, but given the exciting results coming from game-based research, they are clearly a space to watch.