More On Learning By Doing Civics Through Serious Games 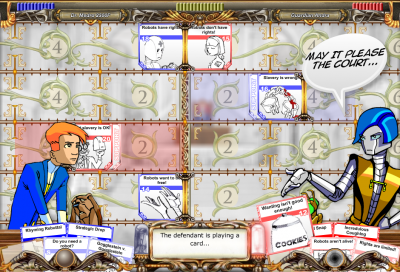 Guardian of Law is also part of the suite of games developed for Justice Sandra Day O'Connor's free, interactive, web-based program designed to teach civics and inspire students to be active participants in our democracy.

The player is a Guardian of Law, a legal professional, who must establish Rule of Law in a futuristic, multicultural society inhabited by humans, alien species, and intelligent robots.

Players explore SkyCity that uses the American legal system but has regions of lawlessness where specific civil rights are violated. The player meets people who have civil rights cases that must be resolved. After a player takes a case, the player finds case cards to support arguments. When the player has a sufficient number of case cards, the player goes to a courthouse to argue the case. 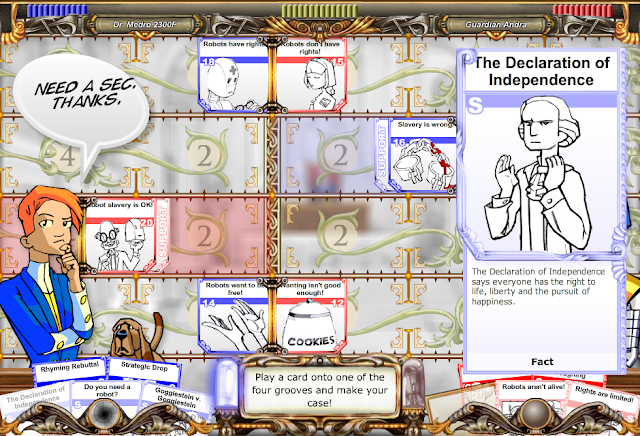 As the player wins cases, rule of law is established, and SkyCity changes to reflect the effects of the civil right on society. Players will also be given the opportunity to argue extreme cases, so they see the dynamics between law and society and see the impact on society that laws may have.

The purpose of Guardian of Law is to teach students, specifically middle school students, about American civics in a new and exciting way. Students will learn about legal concepts such as due process and equal protection as well as important case precedents such as Brown v. Board of Education. More importantly, students will apply their knowledge in a way that improves their argumentation skills, which will fundamentally improve both their traditional academic and 21st century skills. Students will also learn about civic engagement by exploring various civil rights topics within the game.

Over time, improvements in argumentation can be measured as the student takes cases and argues them in court. Having cases that develop particular issues allows the possibility of gauging student interest in specific civil rights topics and allows students to become expert in topics of personal interest. 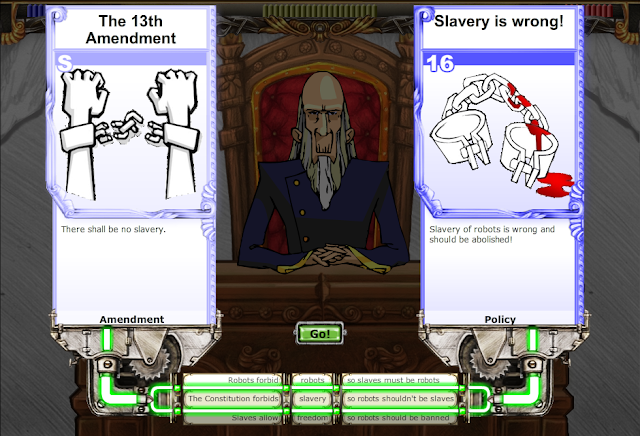 Argumentation in Guardian of Law

Filament Games had various Our Courts and ASU (Arizona State University) folks help them whiteboard and paper prototype argumentation. The first challenge was structural: if they're to let players argument using cards, how do they break an argument down into pieces that fit onto cards in the first place?

They’ve decided to whittle cards down into two simple categories: Argument and Support. An Argument Card was the "head" of an argument, a basic statement that needed reinforcement. A Support Card was one of the myriad ways you could support an Argument Card. Players would make evaluative judgments on the quality of the relationship between arguments and supports, and that judgment included the evaluation of that support intrinsic strength.

This system gave the subject matter experts a deep level of evaluation of argumentation without cramming a dictionary-sized rulebook down the player's throat. It meant that players interested in doing well would either have to play the game many times (an educational win!), research a hint document that maps out which card works well with each other (win again!), or evaluate the cards on their merits by reading them carefully and pondering (super duper win!).