By Eliane Alhadeff March 11, 2010
Four ideas about where Serious Games can go next WarGames (1983) - Matthew Broderick stars as David, a bright, but underachieving kid. His lack of motivation at school, along with his quick wit, often gets him meetings with the principal. But he is fascinated with computers and that is where his mind really shines. While looking for a game company online, he stumbles across a military system that features war simulations. At first, he does not realize it is a military system, and plays “Global Thermonuclear war”, which triggers the U.S. defense system. 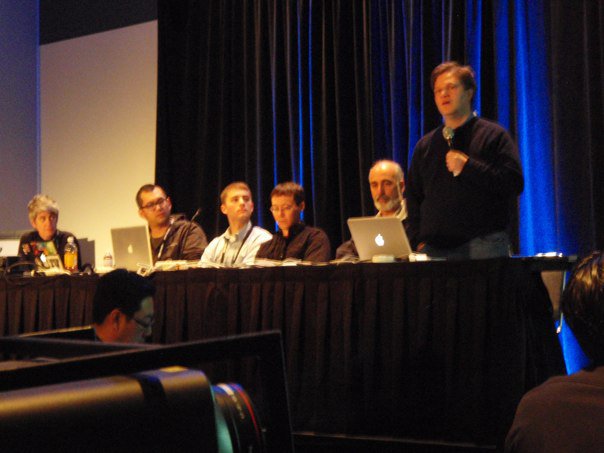 Speakers: Colleen Macklin (Associate Professor, Parsons the New School for Design), Kevin Harris (University of Wisconsin), Kan Yang Li (Research Faculty, Parsons The New School for Design), Noah Falstein (President, The Inspiracy), Ben Sawyer (Co-founder, President, DigitalMill)
As an established field Serious Games must now focus on consistently finding new ideas and endeavors to push forward on -- new edges that can open up important opportunities for expansion of the field (find also my previous post Live From GDC 10: Serious Games As An Incubator For All Tracks).
Here are the highlights for Ben Sawyer’s talk:
Re-imagining Drill & Skill
Serious Games for education and training have often tried to move beyond some of the earliest efforts in education gaming commonly derided as drill & skill. Given that game design ideas have advanced a lot since the advent of both games and robust serious game activity is it time to revisit drill & skill gaming and see if there is room for improvement and innovation?
Ben Sawyer leveraged his presentation on WarGames (1983), an American thriller film written by Lawrence Lasker and Walter F. Parkes and directed by John Badham. The film starred Matthew Broderick in his second major film role and follows David Lightman (Broderick), a young hacker who unwittingly hacks into WOPR, a United States military supercomputer programmed to predict possible outcomes of nuclear war. Lightman gets WOPR to run a nuclear war simulation, originally believing it to be a computer game. The simulation causes a national nuclear missile scare and nearly starts World War III.
In trying to find WOPR’s "back door", the best lead Lightman is able to get is “going back to the first game on the list”.
Ben Sawyer used this lead as a metaphor for “Simplifing the Game” (in this context - Serious Games), which has reminded me a lot Facebook games’ value proposition.
Sawyer has also explored multiple combinations of Learning and Behavior Change, segmented in As Game and With Game Contexts.