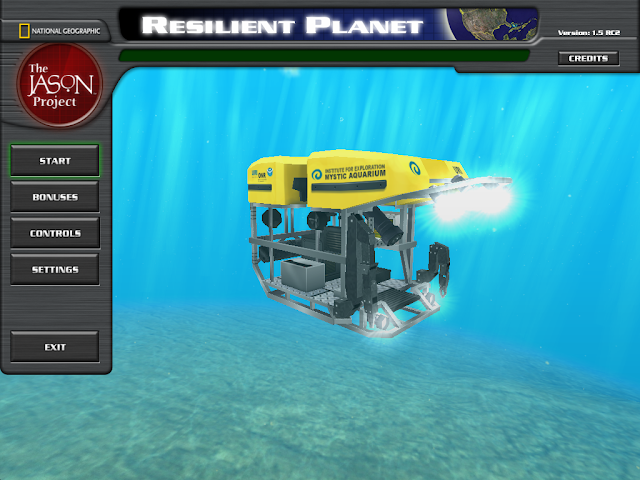 Via: Jason Science – Education Through Exploration

The Jason Project was founded in 1989 by Dr. Robert D. Ballard, the oceanographer and explorer who discovered the shipwreck of RMS Titanic. This prompted thousands of kids to write him letters, asking to join his next expedition. Technology was the way The Jason Project made that happen.

Backed by National Geographic, this interactive and immersive site connects students with great explorers and great events to inspire and motivate them to learn science. The award-winning curricula embed cutting-edge research from NASA, NOAA, the U.S. Department of Energy, the National Geographic Society and other leading organizations and allow leading scientists to work side by side with JASON students. 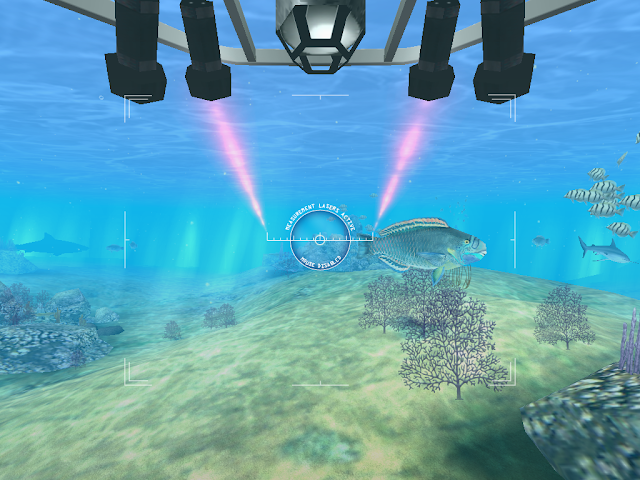 The Jason Project has always embraced technology as a way to connect real scientists doing exciting research in the field with teachers students around the world.

For example, The Operation: Resilient Planet game empowers school-aged-children as they travel to some of the most unique underwater ecosystems in the planet and gather cutting -edge data about some of the planet’s most vulnerable creatures. Kids use fun, exciting, and authentic tools like remotely operated vehicles and “Crittercams” to assemble an understanding about some of the most endangered marine species in the world. Together with close collaboration with some of National Geographic’s leading ecologists, players uncover groundbreaking ecological theories that have only recently emerged in scientific journals.

The first mission occurs in the Gulf of Mexico. Explosives on an oil platform are in the process of being placed and time is running out. Below the surface of the waves, many species must be protected, and Dr. Bob Ballard (the discoverer of the Titanic, who does the voice acting in the game) is asking for help to save the turtles. 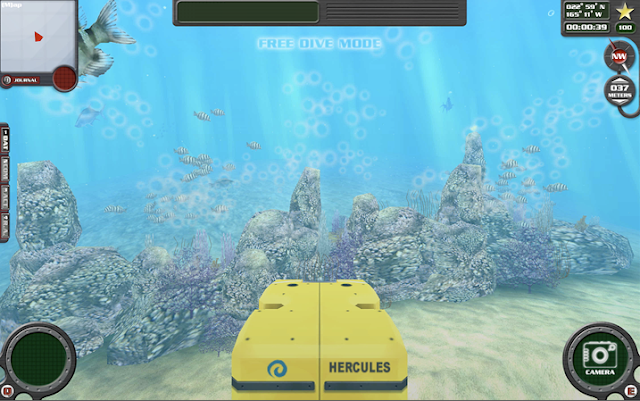 In Jason’s Operation: Resilient Planet Game students get to use an ROV to visit the Gulf of Mexico and the oceans outside of the Northwestern Hawaiian Islands to recreate some of the research questions tackled by National Geographic explorers such as Bob Ballard, Enric Sala, and Greg Marshall. Jason Project collaborated closely with these scientists and worked to capture these environments as faithful as possible.

In Mission 2 - Resilient Planet: Flower Garden Banks, players step into the role of a NOAA marine ecologist and licensed operator of the Hercules ROV working to decode a complex ecosystem according to the scientific process. Aided by archaeologist and oceanographer Bob Ballard, and equipped with a host of authentic scientific tools and practices, they must navigate the Flower Garden Banks National Marine Sanctuary in search of data that will help them protect the local marine life. Players use a Crittercam to monitor the activities of hawksbill and leatherback turtles, perform a biodiversity survey using a dichotomous key, locate and evacuate at-risk turtles from the area surrounding the platform, scope a pickled buffalo, and so on.


In Mission 4 - Resilient Planet: NW Hawaiian Islands, players must navigate the Papahanaumokuakea Marine National Monument in search of data that will help them either corroborate or debunk the shark infestation theory. 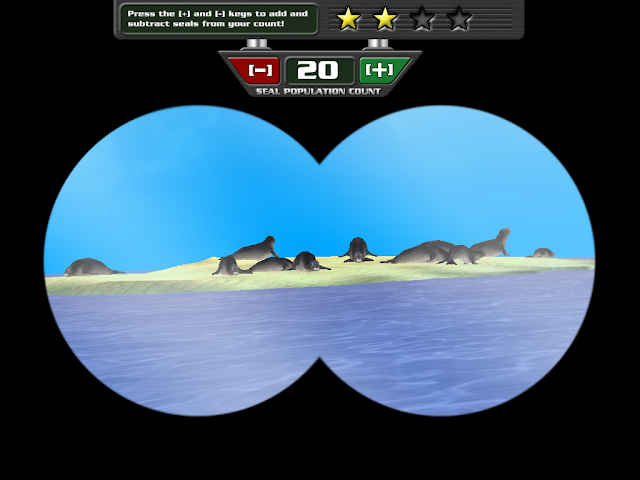 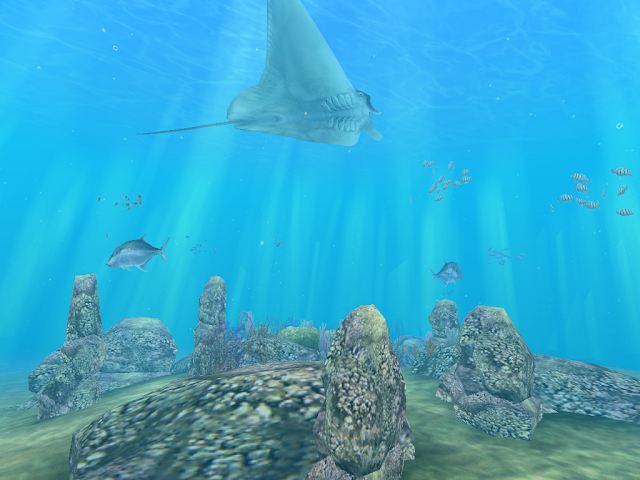 The Operation: Resilient Planet is very much a field research game: it gives students scientific understanding and insight into the factors leading to species endangerment. The game focuses on four endangered species and offers an exploration on how human behaviors impact species survival. The intended impact is to arm students with empirical data about why biodiversity is essential to the planet and humankind. But collecting good data is only part of the picture. Afterward, players must use their data to construct and deliver scientific arguments: the game is a call-to-arms against harmful practices such as water pollution, over-fishing, shark culling and uncontrolled CO2 emissions. 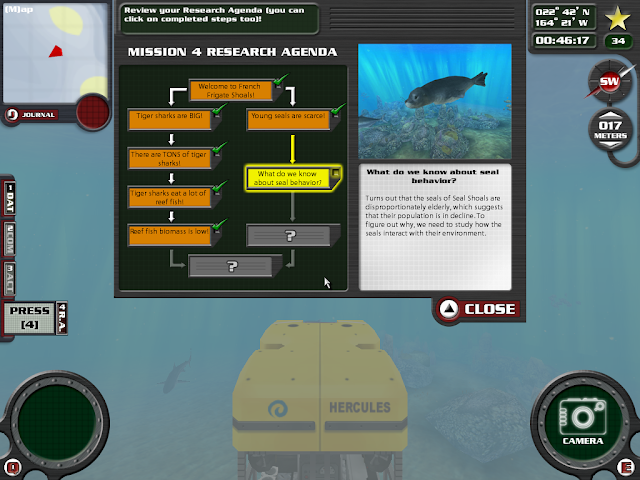 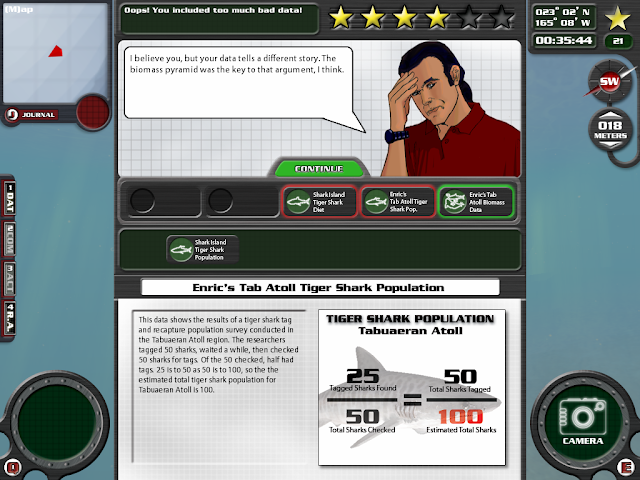 Marjee Chmiel is the director of digital media for National Geographic's The JASON Project where she designs and produces a variety of video games and other interactive online applications that support The Jason Project's award winning online science curriculum. She is a doctoral student at George Mason's Graduate School of Education in Fairfax, Va.

“As we are starting to really gather a rich library of games, the most exciting thing for me has been to work with and talk to teachers using these games in schools”, she says. “I hear from a lot of teachers that their return on time investment in these games is amazing. Kids get excited and talk about the content of what they are learning to other students, teachers, and parents. When we piloted one of our games last year, we did so on the last full day of school. It was a Friday in June and we had five class sessions of seventh graders who were dead silent, playing the game. I couldn't believe it.”

“Students get really into fact-checking our games as well”, she adds. “They wouldn't do that if they weren't interested in what the games are saying. For instance, in the game we talk about pristine ecosystems, atolls that have never been inhabited by humans.

Apparently, some of the students were skeptical about whether this was true, so they looked it up over the weekend and reported to their teacher the following Monday that there was such a place in the Northwestern Hawaiian Islands. Some of the species we cover in that mission, such as monk seals and tiger sharks, really caught their imagination. They went home and tried to find more information about them. That is precisely what I think we all imagine when we talk about developing the habits of a life-long learner.”

“The premise of one of the missions in the ecology game is also that you are questioning a proposal put forward by a pretend, but respected, scientist, and I really do think that is a strength of how games can present science. This habit of skepticism and peer-review is vital to the way science works and is something we all need to be scientific literate, but it's often left out of textbooks and traditional curricular materials. There is something elegantly perfect about the idea that we use technology to teach those habits, and then the students turn around and use technology to verify our claims. I've never seen a textbook motivate students to do that.”

“The other piece that has been promising is the extent to which games allow themselves to be areas where students with certain learning disabilities can really thrive. Some students need their own private, little universe to learn, explore, make mistakes, or try new things. When you've got a variety of visual and audio cues helping you learn something, the content is just that much more accessible and students are imbued with this new confidence. We saw some really wonderful instances of this during our pilot testing.”

Some of their award-winning games include: Coaster Creator, Storm Tracker and Mini Labs.