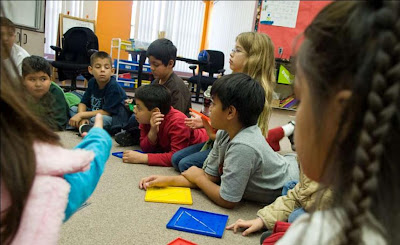 Via: Interactive Multimedia Technology - Recess is Linked To Academic Achievement

Lynn V. Marentette, on her latest post, provides links to Gallup Survey of Principals on School Recess, commissioned by the Robert Wood Johnson Foundation, the National Association of Elementary School Principals, and Playworks.

"With the push for academic rigor and higher performance on one-size-fits-all state-mandated group tests", she says, "young children have had fewer opportunities to play while at school, despite the observation that children return from recess more focused and ready to learn."

The State of Play: Gallup Survey of Principals on School Recess

Here is a taste of the report findings:

"When most people talk about how to improve education, they tend to focus only on what happens in the classroom. But the most unexpected opportunity to boost learning lies outside the classroom: on the playground at recess.

A new, first-of-its-kind Gallup poll reveals that elementary school principals overwhelmingly believe recess has a positive impact not only on the development of students’ social skills, but also on achievement and learning in the classroom.

These findings arrive on the heels of groundbreaking research linking more recess to better behavior and focus in the classroom.

Recess doesn’t come without challenges. Because it is often disorganized and difficult to manage, recess is the time when principals encounter the vast majority of their school’s disciplinary problems. While principals unequivocally see recess as an asset to learning, even a modest effort to improve behavior on the playground can pay significant dividends throughout the school day.

The Foundation’s interest in recess evolved with its understanding that health is not only something that happens at the doctor’s office but instead starts in families and workplaces and in schools and school playgrounds.

Education in particular has a tremendous impact on one’s health. If a child’s learning environment is disruptive then so is their ability to grow up to be as healthy as they could otherwise be."

"A growing body of clinical research concludes that play is essential to the social, emotional and physical development of children. But the reality is today’s kids spend more of their time in a school classroom than almost anywhere else, and even that time is much less playful than it used to be, given the heavy focus on meeting testing requirements.

A 2009 study by the Alliance for Childhood found that playtime is shrinking and even disappearing in kindergarten classrooms. (Miller & Almon, 2009).

Recess has traditionally served as the one outlet during the school day when kids get to recharge their bodies and minds. But those minutes have been steadily eroding. Up to 40 percent of U.S. school districts have reduced or eliminated recess in order to free up more time for core academics, and one in four elementary schools no longer provides recess to all grades. (Zygmunt-Fillwalk and Bidello, 2005; McKenzie and Kahan, 2008).

There is already evidence that scaling back recess comes at a cost to learning. In January 2009, the journal Pediatrics published a groundbreaking study of 11,000 third-graders, comparing those who had little or no daily recess with those that had more than 15 minutes of recess per day. The findings show that children who have more recess time behave better in the classroom and are likelier to learn more. (Barros, 2009).

There is also research that shows that investing in recess can have a positive impact at schools that struggle with managing student behavior. A Harvard Family Research Project case study of Boston’s Ohrenberger Elementary School, which revamped its recess with the help of Playworks, revealed visible improvements in several key areas of childhood development.

Teachers witnessed how a well-functioning recess could foster supportive relationships among students, create opportunities for meaningful youth involvement, and teach conflict resolution and other life skills.

Playworks also routinely surveys hundreds of faculty members at its partner schools and has found that teachers can reclaim up to 18 minutes of learning time per day because there are fewer problems from the playground spilling over into the classroom.

Ultimately, principals are most capable of evaluating the role that recess plays in the school day and estimating its true value. Any recommendations regarding recess must take into account what principals think because they are uniquely positioned to replicate best practices. Together, these reasons served as the rationale for exploring principals’ attitudes toward and experience with recess first hand."