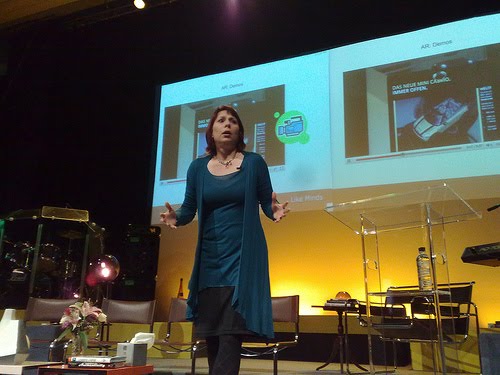 Joanne Jacobs at Like Minds 2010
At the Like Minds conference in Exeter this week, Joanne Jacobs looked at the opportunities for companies developing location-based services, augmented reality and gaming

Via: guardian.co.uk - Like Minds: Augmented Reality, Location Based Services and "Serious Games"

At the Like Minds conference in Exeter, social media consultant Joanne Jacobs looked at three technologies - location-based services, augmented reality and "Serious Games" - and explained how and why companies needed to take these emerging technologies seriously.

However, she was quick to say that while there were many opportunities to use these technologies effectively that a lot of them currently were "rubbish".

Augmented Reality (AR) seemed all the rage in 2009, but she said that its entering the "trough of disillusionment" crashing after the "peak of inflated  expectations", referring to the hype cycle coined by tech analysis group Gartner.

One AR application she found required you to buy a t-shirt, then sit in front of your computer with a webcam to play rock, scissors, paper with yourself. "It's hopeless," she said.

However, our society is becoming much more visually oriented, and AR offers the opportunity to deliver better information. For instance, many stores already had online shops that would suggest alternate products. They already had that database. Why not develop an AR application that would allow shoppers to point their camera phone at something on the shelf and see other products they stocked?

Ikea offer a service where you could take a picture of your lounge and see their furniture in your own lounge.

Location-based services and geo-tagging also offer lots of opportunities. She said that geo-tagging offered the opportunity for better connections. We're seeing this now with location-based networks such as Foursquare, Gowalla and Google's Latitude.

"The only really useful communications tools are those that create better relationships between individuals," she said.

To develop location-based applications, she urged people to focus on already widely available technology. Instead of giving in to the hype around the iPhone, she urged participants to focus on larger opportunities. The iPhone only amounted for 16.6% of global smartphone sales in the last quarter of 2009, according to ABI Research said. In contrast, Nokia smartphone share increased to 40%, and Nokia smartphones are already capable of geo-tagging and location-based services.

She also talked about games, not video games, but what are often referred to as "Serious Games". Private equity was flowing into these types of projects because "it's cheaper to do drills in immersive environments or games than to do litigation or the clean up from errors," she added.

One problem with many serious games efforts was that they were too earnest. To be successful, serious game designers needed to understand people's motivations. "You have to give people the incentive to participate," she said.

These emergent media were currently used by early adopters, but with successful technologies, the gap between early adoption and the early majority is typically between three to five years, she said. To take advantage of these trends, companies needed to start now.

When done right, location based apps offer better connections, augmented reality offers better information and Serious Games offer you the ability to explore more effectively the environments in which you exist, she said.

Like Minds is a day of business community action, challenging the ideas of existing social media thinking and drawing up solutions that can be applied to better business practices and the wider society. The conference hosts a diverse range of speakers from around the world.

Keynote speakers and panellists from around the world converged on the Exeter Conference Centre on Friday February 26 (10am-8pm), along with large brand sponsors such as Orange Mobile and Kodak, national press, and leading global PR and advertising agencies such as Ogilvy Group.

The event explored the change in business towards greater levels of personalization for their customers, and the role that being ‘social’ plays in enterprises and charities as the world becomes more connected through social networking and mobile devices.

Scott Gould, the co-founder of Like Minds, commented: “Our aim with Like Minds 2010 is simple: to walk the talk. The challenge we face is not only to inspire people, but to give them the tools to immediately act on that inspiration.

“Our hope is that the new technologies and ideas we are discussing at the conference are used effectively only as tools to enable what is the most precious human resource – each other.”

Organizers were looking to build upon the success of last year’s event which attracted 200 attendees and reached over 200,000 online participators through Twitter.