Serious Games For A Better Future - EnerCities Out Of Beta 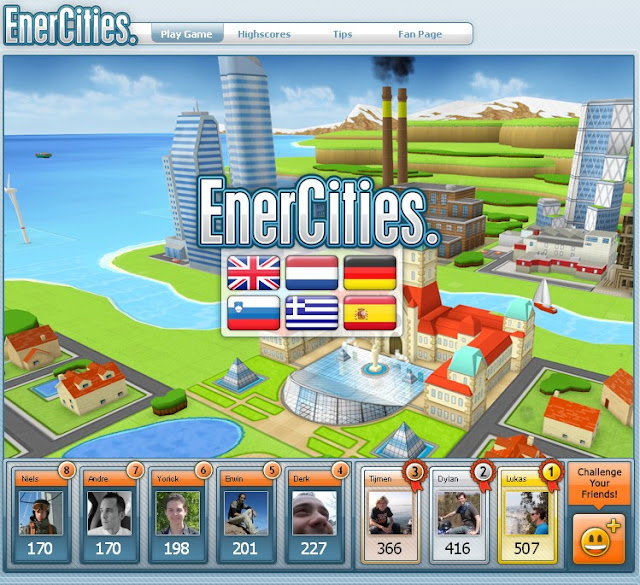 Gaming For A Better FutureLeiden, The Netherlands - February 3rd 2010

Following my prior post EnerCities: The First Serious Game On Facebook, on February 3rd, game developer Paladin Studios has launched EnerCities 1.0. It is an online game in which players are challenged to build a sustainable city. It will run online and on Facebook, and is available in six European languages. The game is part of an educational platform dealing with energy issues, backed by European Commission funding of €1 million.

The game starts with a small village and a bit of land to build on. There is a simple drag-and-drop interface, with which players can build structures and expand their city. They then need to balance People, Planet and Profit - all while supplying the growing city with sufficient electricity and minimizing fossil fuel use. When done well, players can level up their city, providing them with more room to build and extra building options. Dylan Nagel, product manager for EnerCities: "Each decision influences the score: for example, if you build a nuclear plant, you minimize impact on your environment. The downside is that if you put it close to residential areas, your citizens will get unhappy." A similar example is with forests. "When clustered together, the environmental bonus of forests multiplies. However, when a forest is positioned next to a residential area, your citizens will be happier and healthier. This leads to interesting dilemmas."

The project is funded by the Intelligent Energy program of the European Commission, and aims to improve the awareness of energy issues among young people. It will be rolled out by the project partners on schools in the UK, Netherlands, Slovenia, Greece, Germany and Spain. There is an educational platform which allows teachers to sign up for the program and link their students' accounts to their school. Nagel: "Players will be able to leverage green technologies and concepts in order to make their city future-proof. Players can improve their structures with innovations like solar roof panels and thermal storage. They need to power their city, and can pick a range of power sources. Would you choose a Coal Plant or Windmill? Each have their own pros and cons. This allows players to execute a strategy, and see the results of their actions on the long term. I think it makes for a great toolkit for teachers who want to embed the energy topic in their curriculum."

The initiator of the project, Dutch organization Qeam, will investigate the results of the project. Erik Knol, director of Qeam: "By validating the project outcomes, we hope to answer the question whether serious gaming is a valid tool for raising awareness. The reports will be shared with the educational community, to provide more insight into the effective use of innovative platforms like gaming." The research will be conducted in the course of 2010 and 2011.

With over 350 million users, Facebook has proven to be a viable platform for games like Farmville. The farming game can boast 75 million monthly players. Derk de Geus, CEO of Paladin: "The potential of social networks is enormous, although we would already be successful with much lower numbers. Remember that EnerCities was not designed to be a truly social game, but an educational tool running on a social platform."

The new release includes a Post To Wall feature, which allows players to brag to their friends if they reach a new high score. De Geus: "We decided to put the game on Facebook at the end of 2009, right after the initial pilot tests. Many of the Facebook users are in our target group, so it is an excellent distribution platform. The use of social gaming for education is relatively new, but already proves to be very powerful. The beta players either loved it or hated it. That's a lot more emotion than you would get from an average educational tool, so I guess we are on the right track."

The game became out of beta on February 3rd. The official launch will be at Learntec in Karlsruhe, a German conference about technology and education. The game will then open up to players worldwide, both for educational institutions and just for fun. Nagel explains: "The first thing we said when we started the project, is that the game should be fun to play. The city building theme was great for a game which resembles a puzzle more than a simulation."

Paladin's social gaming adventure apparently worked out well for the company. De Geus: "We dipped our toes in social water with EnerCities, and liked it a lot. It sparked a lot of ideas, and we have another social game in preproduction. So stay tuned."

The game can be played for free at http://www.enercities.eu/ Educational institutions are welcome to register at the website.

Founded in 2005, Paladin Studios is a Dutch game development company based in The Hague. They have released several serious games and are currently creating games for social networks. With a portfolio ranging from hardcore offshore simulators to interactive visualizations and online games, they provide a wide range of 3D game development services. Their clients include Philips Design, EMI Music, and the European Commission. The 7-headed team consists of a talented bunch of programmers, designers and artists. Paladin's motto is "Life is Play", and their official mission is to make people smile.

For more information about the game, please contact Paladin Studios at info@paladinstudios.com or via +31 71 513 2222.

Derk co-founded Paladin Studios, and has since been involved in both the business and creative sides of the company. As CEO he makes sure that the core values and commercial health of Paladin are preserved and developed.

Derk blends creativity with strategic thinking and entrepreneurship. The most important principle for him is "Good Business", a concept revolving around respecting another's rights, striving for mutual success and providing a healthy workplace as an employer. This dimension of entrepreneurship provides him with a purpose beyond making money, something he believes is essential for sustainable success.

Dylan has been playing and creating computer games from a young age. He is convinced of their potential and relevance to modern society. In his opinion, games enhance people's lives, and can be used to enrich design, communication and training strategies.

One of Paladin's founders, Dylan is Vice President of Business Development. His responsibilities include consultancy and account, sales and product management. He is the conduit between clients and the production team, ensuring optimal understanding.