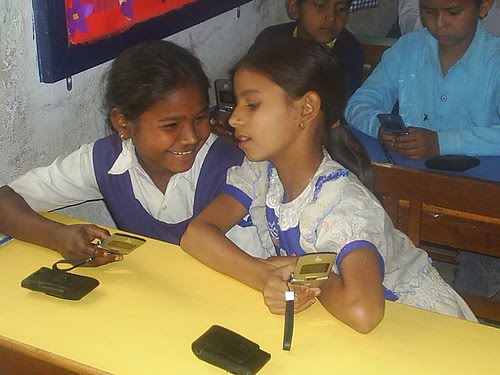 Lit to Quit: A Mobile Game for Health

Designing engaging games using mobile technologies has significant implications for game and health industries. This presentation describes iPod Touch/iPhone features that can be harnessed to create games that have positive health outcomes.

Funded by the Robert Wood Johnson Foundation, Lit is being designed specifically for the iPod Touch/iPhone as a health intervention for smoking reduction.

Breathing into a microphone to control gameplay, coupled with sound, graphics, challenges and feedback to mimic the stimulant and relaxant effects of smoking, it provides a potential alternative to smoking with the goal of reducing or eliminating tobacco use in players' lives. 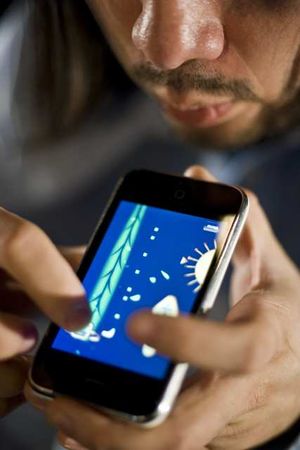 You can play music on the iPhone with the Leaf Trombone app. Researchers believe they can come up with a similar app for smokers to help them quit smoking. Credit: Peter DaSilva/Los Angeles Times

Columbia University's Teachers College received a $150,000 grant from the Robert Wood Johnson Foundation, through the foundation's Health Games Research national program to develop a smart phone app that emulates the physiological responses smokers get from smoking.

The first apps are likely to be for Apple Inc.'s iPhone or iPod Touch. The user would control the game by blowing into the device's microphone in response to different color and sound stimuli coming from the handset. Researchers hope that it will be able to elicit the same brain patterns, heart rate levels and relaxation responses that smokers get from smoking. The game, Lit: A Game Intervention for Nicotine Smokers, is expected to be released in about two years.

Breath therapy has been used to help smokers quit smoking for a while, but it's hoped that the game will disseminate this technique to the masses. "You don't have to learn anything; the game will cause you to breathe the right way," said Charles Kinzer, professor of education in the Communication, Computing and Technology Program and the Game Research Lab at Teachers College.

Technology is being used in another way to help smokers quit smoking. Researchers at the GRAP Occupational Psychology Clinic and the University of Quebec in Gatineau recently found that smokers who crushed virtual cigarettes experienced a significant reduction in nicotine addiction.

Tobacco use is still the leading cause of death in the United States, according to a statement from Kinzer and the Lit project team. It added that 70% of adult smokers say they want to quit, and more than 40% try to quit each year.

Kinzer said, "If we can capitalize on the motivational aspect of games and the availability of mobile devices, there is tremendous potential to positively affect heath and wellness for smokers who want to quit, and this would have implications for healthcare costs as well."

MILLEE: Mobile and Immersive Learning for Literacy in Emerging Economies

MILLEE is a cellphone-based game that enables poor children in the developing world to acquire language and literacy in immersive, game-like environments.

The MILLEE project is in its 6th year and has seen extensive field tests. It adopts a human-centered approach to designing immersive, enjoyable, language learning games, modeled after the traditional village games that rural children find familiar.

The project has received major sponsorship from MacArthur Foundation, Microsoft, National Science Foundation, Nokia, Qualcomm and Verizon. It was featured in the press in India (where the last 10 rounds of field studies took place), a Canadian Broadcasting Corporation television documentary and ABC News. 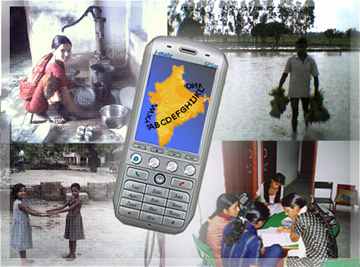 Literacy levels in most poor countries remain shockingly low. Even more challenging is the tension between regional and “world” languages – economic opportunities are often closed to those who are literate only in a regional language.

In India for example, English is the language of instruction in private schools and all universities, a large fraction of business and government, and the language which is driving India’s service economy. The value of English is widely recognized by ordinary Indians, and it is the poorest citizens who are lobbying most strongly to expand English teaching. For complex reasons, however, English teaching in public schools is not succeeding. For instance, teachers in rural Indian schools were unable to converse with us in English despite being required to teach the language. Worse, regular school attendance is out of reach for those children who have to work for the family in the agricultural fields or households.

At the same time, the cellphone is the fastest growing technology platform in the developing world. India is the largest market for cellphones worldwide, with the majority being bought by illiterate and semi-literate users. A growing percentage of these phones feature advanced multimedia capabilities for photos and gaming. These devices are a perfect vehicle for new kinds of out-of-school language learning, which can occur at places and times that are more convenient than school.

These factors create an extraordinary opportunity for complementing the formal educational system: to dramatically expand English skills in young Indians, which is the fastest way to open the doors for employment and further education.

MILLEE aims to realize this opportunity through a scientific approach. It adopts a human-centered approach to designing immersive, enjoyable, language learning games on cellphones, modeled after the traditional village games that rural children find familiar. It has won several competitive grants and seen extensive field tests.

In addition to scaling-up the project in India, MILLEE is being expanded into rural China (Mandarin literacy), Kenya (English literacy) and elsewhere.

Dr. Matthew Kam started MILLEE in 2004 as his Ph.D. thesis at the University of California, Berkeley, where he is an alumnus of the Berkeley Institute of Design and TIER research group (Technology and Infrastructure for Emerging Regions). He had a thesis committee that was committed to giving him the support to pursue truly interdisciplinary research that went beyond the traditional boundaries of computer science, development economics, or language and literacy studies.

Since graduating with his Ph.D. from UC Berkeley in 2008, Matthew joined Carnegie Mellon University in January 2009 as an Assistant Professor, where he is expanding MILLEE into India, China, Africa and other underdeveloped regions. At any one time, Matthew advises about 20 Ph.D., Master’s and undergraduate students who contribute to the design, programming, graphics and playtesting of the MILLEE games that will be piloted in the field.

Technology transfer takes place in parallel to the above research activities. Shabnam Aggarwal joined the team in 2009 as the project manager who is based full-time in India. Matthew and Shabnam work hand-in-hand on business and partnership development. The goal is to build a social enterprise that can create and distribute MILLEE games in underdeveloped regions around the world on a cost-recovery basis. With mobile technology that can extend the reach of learning beyond formal school environments, the vision is to revolutionize educational services delivery throughout the developing world.

Since MILLEE began in 2004, the project has conducted 10 rounds of fieldwork spanning almost 12 months in India. Exploratory studies revealed social and infrastructural challenges to using desktop computers to promote learning in school settings. On the other hand, there is a tremendous opportunity for out-of-school learning via educational games on cellphones. 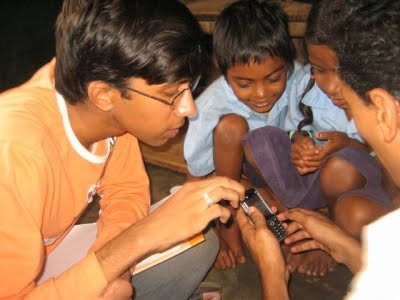 The foundational games have gone through numerous iterations since 2006, through formative evaluations with four communities of rural and urban slums learners in both North and South India. By field-testing with multiple communities, the project team observed user behaviors with the technology that generalize across settings. Through ethnographic studies, they also studied how social factors such as gender and caste affected MILLEE gameplay in everyday rural environments.

The end-product is therefore not only the games themselves, but a suite of tools and methods for adapting and extending them for local use.

The project has concluded a summative evaluation where 27 students attended an after-school program at a village in Uttar Pradesh, India three times per week over a semester to learn English using MILLEE games. They drew on the latest research in language acquisition and also reviewed 35 successful commercial language learning packages to identify their best practices.

MILLEE achieves a seamless integration between social entrepreneurship and scientific research, in which research is an ongoing process that feeds back into social enterprise. According to the World Bank, “despite growing hype [about the potential for mobile phones to improve education in developing countries,] there are still precious few widespread examples of the use of [mobile] phones for education purposes inside or outside of classrooms in developing countries that have been well documented, and fewer still that have been evaluated with any sort of rigor.” To make a more compelling case for adoption to governments, non-profits working to improve education, parents and educators, the next phase of research focuses on a larger-scale evaluation of learning benefits.

Hills of Gold: Walk to Play

Hills of Gold is an iPhone/iPod Touch game project being built for Humana, Inc. that combines everyday walking around with a fun-to-play resource strategy game about the California Gold Rush. According to an article posted by the American College of Sports Medicine, a number of large- scale studies over several years have shown that individuals who walk at least 30 minutes per day may reduce their risk of cardiovascular disease up to 50 percent compared to sedentary individuals.

Hills of Gold aims to promote and support such habitual activity by bringing some overlaid gameplay to everyday walks. Players must move their character and his resources of mules, miners, food, gunslingers, and more around the gold rush country of California in 1849 trying to find their fortune. As the player walks the iPhone/iPod Touch accelerometer measures physical activity and translates that into gameplay data the player uses to move their lead miner and his party around the game world. Players must fend of claim jumpers, manage their budget, and keep moving!