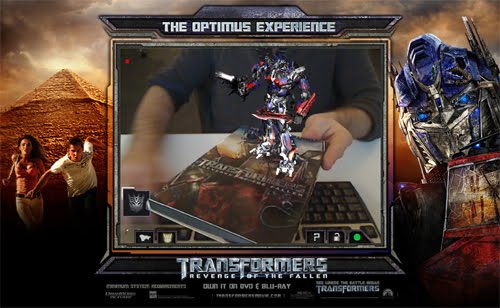 LOS ANGELES (January 20, 2010) – In what may herald a new benchmark in entertainment marketing, augmented reality is beginning to transform the way key brand assets of hot film and music properties – performers, characters, scenes, and more – migrate from the original medium to the consumer’s world.

The just-concluded holiday season affirms the trend. With the DVD launch an increasingly important coda to tentpole titles, Total Immersion (www.t-immersion.com) has infused augmented reality (AR) into three of this season’s hottest home entertainment packages – for Paramount’s Transformers: Revenge of the Fallen and Star Trek, and Fox’s Night at the Museum: Battle of the Smithsonian.

At the same time, the company has executed its first campaign for the music industry, for Universal Music TV/All Around The World artists N-Dubz. As part of its latest release, the platinum-selling band interacts with viewers – and performs in AR.

Total Immersion’s latest applications reveal an evolution in marketing that merges multiple channels and uses the latest in AR technology to engage consumers in the brand experience as never before. The company supplied AR applications to Paramount and Fox to promote the theatrical release of all three titles.

Among this past holiday season’s biggest movers, Transformers: Revenge of the Fallen “went AR” in two-disc Blu-ray and DVD sets.

Fans can give life to an augmented reality incarnation of robotic character Optimus Prime by simply displaying DVD or Blu-ray boxes before a webcam. Viewers can also access a special website, which asks that they assemble the Matrix of Leadership to bring Optimus Prime back to life, fix his armor and calibrate his weapons by controlling his aim during target practice. 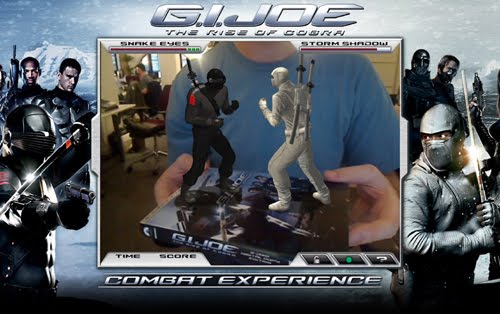 Paramount Home Entertainment’s DVD and Blu-ray Disc releases of Star Trek deploy AR to take consumers on a self-guided tour of the U.S.S. Enterprise. Showing the disc box to a webcam triggers an AR journey of five cabins on the Enterprise -- and even enables consumers to fire on foes from the ship’s deck. 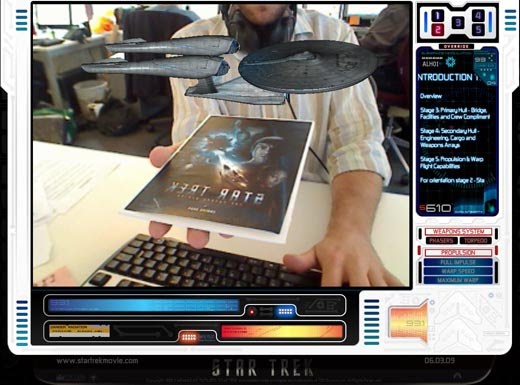 20th Century Fox’s Night at the Museum: Battle of the Smithsonian likewise enables consumers to enter the movie experience. Just as museum wonders come to life in the film, so the DVD and Blu-ray Disc packaging (abetted by a webcam) unleashes Rex the Dinosaur, the giant squid and Amelia Earhart’s plane, among other snippets. All seemingly pop off the box -- and put the consumer at the center of the action.

N-Dubz’ new album, Against All Odds – released on Universal Music TV/All Around the World -- features an augmented reality performance by the band, triggered from data embedded within the album artwork. When displayed before a webcam, the artwork reveals 3-D images of the band chatting with the viewer and then giving an impromptu performance of the hit new single, “I Need You” -- all within the palm of the viewer’s hand. Consumers can turn the sleeve artwork around to view the band from alternative angles. Band members move as fluidly as they would if they were physically standing on the paper held aloft.

“We’re helping home entertainment marketers engage their audiences on an entirely new level, with experiences from each film crossing from cinematic ‘reality’ to theirs, ” said Bruno Uzzan, CEO and co-founder, Total Immersion. “After more than a decade in development, augmented reality has moved into prime-time. Some of the world’s largest brands are using AR to enhance both brand loyalty and the customer experience, by propelling consumers into a unique 3D interaction with their film. Hollywood is embracing the opportunity to enable fans to explore their handiwork through a process that blends the physical and digital worlds.

“AR is a major technical achievement,” Uzzan said. “But it’s just as compelling a marketing milestone. Through AR, we’re taking the equity of the franchise – key assets like characters and scenes – and giving them to consumers. AR adds value by enabling consumers to explore and experience what amounts to a new entertainment ecosystem. And this is just the beginning.

Total Immersion (http://www.t-immersion.com/) is the global leader in augmented reality. Through its patented D’Fusion® technology, Total Immersion blurs the line between the virtual world and the real world by integrating real time interactive 3D graphics into a live video stream. Leading the augmented reality category since 1999, the company maintains offices in Europe (France and the UK ), Asia and in the U.S. , and supports a network of more than 50 partners worldwide.