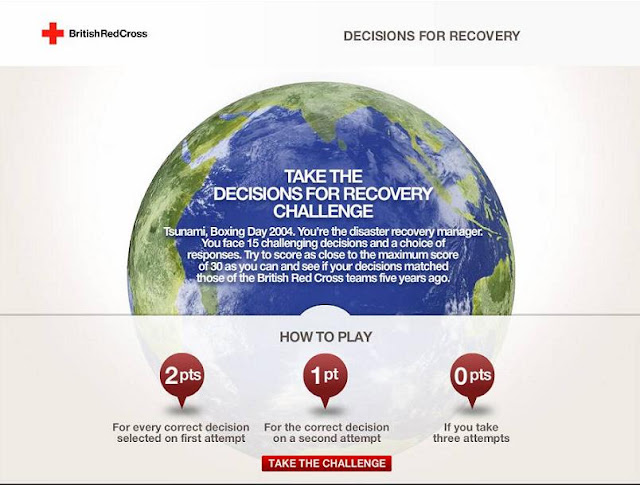 Serious Games Rebuilding A Future After The Tsunami

British Red Cross today announces the launch of a new interactive challenge Decisions for Recovery to mark the fifth anniversary of the Asian Tsunami on Boxing Day 2004 where the world faced the huge challenge of responding to an almost unprecedented natural disaster. This is a Serious Game that  harnesses the power of video game in order to address some of the most pressing issues of our day - in this case poverty and response to natural disasters.

Through Decisions for Recovery, the British Red Cross is asking people in the UK and around the world to put themselves in the shoes of a disaster recovery manager who has to co-ordinate the tsunami response and help rebuild lives.

When so many are suffering, who do you help first? What kind of help do you offer and how do you decide between quick fixes which meet immediate needs and frustratingly slow but sustainable long-term projects? 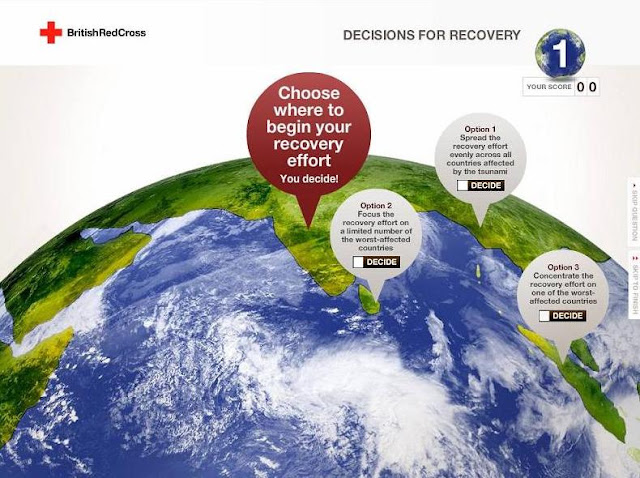 This is an innovative approach to raising awareness of a complex issue online with a strong RPG gaming element that British Red Cross hopes will connect with as wide an audience as possible because of the sheer scale of the response to the disaster. 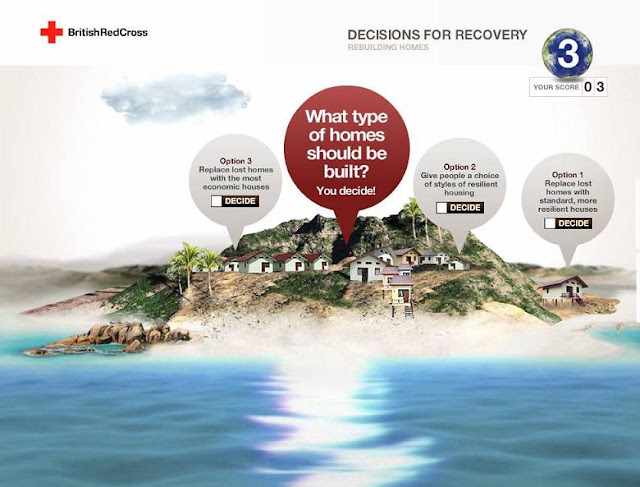 Please find below the press release with full details and the introductory video about the challenge.

Five years ago this Boxing Day, the Asian tsunami unleashed a wave of destruction stretching thousands of miles, creating a devastating trail of human suffering.

In minutes, millions of people’s lives were changed forever, and the world faced the huge challenge of responding to a disaster the like of which no-one had ever seen.

To mark the fifth anniversary of the disaster, the British Red Cross has taken an innovative look back at the tragedy, the long road to recovery and the foundations which have been laid for a brighter, safer future.

Through an innovative new interactive challenge, Decisions for Recovery, the British Red Cross is asking people in the UK and around the world to put themselves in the shoes of those who led recovery from the disaster.

Drawing from the real-life dilemmas Red Cross staff faced, Decisions for Recovery, puts you in the hot seat.

When so many are suffering, who do you help first? What kind of help do you offer and how do you decide between quick fixes which meet immediate needs and frustratingly slow but sustainable long-term projects?

As a disaster recovery manager for the British Red Cross, it’s up to you to direct and co-ordinate the Tsunami response, help rebuild lives and recover a future for people who have lost everything.

“The challenges were enormous, the decisions – as people visiting the website will see - were incredibly difficult, but today I feel very proud of what the Red Cross achieved to help rebuild people’s lives and, more than that, build them back stronger,” said Alastair Burnett, British Red Cross disaster recovery manager.

“We were faced with the most difficult decisions of our lives, decisions that affected hundreds of thousands of people whose lives were destroyed by the tsunami."

“The support we received from the public was phenomenal and enabled us to mount our largest recovery effort since the Second World War. Now we want to tell the story of how the money people gave was spent and the difference it has made to people’s lives.”

With a strong role-play element to encourage those taking part to really consider the difficult choices made in recovering from a major disaster, Decisions for Recovery launches on Wednesday 9th December.

About the British Red Cross

The British Red Cross helps people in crisis, whoever and wherever they are. We are part of a global voluntary network, responding to conflicts, natural disasters and individual emergencies.

The British Red Cross enables vulnerable people in the UK and abroad to prepare for and withstand emergencies in their own communities. And when the crisis is over, it helps them to recover and move on with their lives.