Enterprise VWs: Serious Games To The Value Of $10 bi 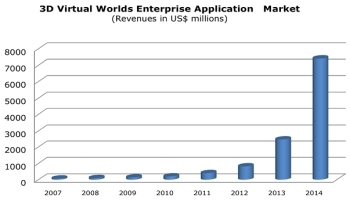 Via: GigaOM Pro - Report: Virtual Worlds for the Enterprise Market

Report Summary: Enterprise 3-D virtual world applications have proliferated during the past several years. What began as fun and games is becoming a serious business with a lot of upside.

A host of new, innovative 3-D virtual world applications have been introduced to the marketplace targeting the enterprise. Some of these applications have been created by established technology companies, such as IBM, Sun Microsystems and Nortel, while others are being developed by emerging players, such as Forterra Systems, ProtonMedia, Qwaq and Unisfair.

This report profiles 14 key players and provides market forecasts for enterprise deployments of virtual world applications over the next decade.

Here is a Taste of It

3-D Virtual World applications for enterprise use will grow into an industry earning $8 billion to $10 billion in annual revenue by 2014, according to the new report from GigaOM Pro (subscription required).

Today, Virtual Worlds are primarily associated with role-playing games and avatar-based chat, but analysts Kris Tuttle and Steve Waite say they will gain widespread corporate adoption as a platform for long-distance conferencing and training, job fairs, and other business uses in the years ahead.

Companies are likely to embrace virtual worlds for such applications first, the authors argue, because they offer a cost-effective, productivity-boosting (not to mention “green”) alternative to air travel.

After reaching a critical mass in the next 12-24 months and doubling year over year, the industry will soon be earning billions of dollars in annual revenue. (Anticipating skeptics, the authors note that the existing market for online enterprise training and collaboration already earns that much just in direct costs alone.)

As for the major players in this burgeoning space? Tuttle and Waite name IBM and Cisco, two companies that have been developing virtual world/online collaboration solutions for years, with Adobe, Citrix, Oracle, and Dassault Systems as other contenders to watch closely.

They also note that the market’s growth will provoke fierce competition among the many enterprise virtual world solutions already out there — OLIVE, Second Life, OpenSimulator, Project Wonderland, to name just a few — leading to a shakeout in the industry. After this tumult, a few dominant behemoths and successful niche players will emerge, though it’s still unclear if the winners are already on the market, or still in development.

In any case, the report recommends that companies large and small should immediately start pilot programs based around virtual worlds. “Because the technology is delivering cost savings and improved operations,” they argue, “the time to begin is now.”