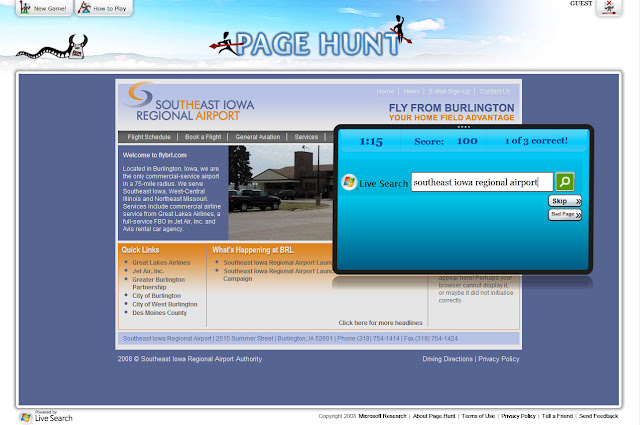 Page Hunt shows users a Web page, without the URL, and asks them what search query they would type to get to that page.

According to Ross Smith, Director of Test, Windows Security, at Microsoft, Productivity Games are a sub-category of Serious Games designed to improve the productivity and morale of people doing "regular work”, or in other words:

In his extensive post Portfolio Selection and Game Theory in Defect Prevention, he states that Productivity Games could be the Six Sigma of the 21st century.

Ross Smith also states that Productivity Games attract players to perform tasks that humans are good at but computers currently are not.

“Although computers offer tremendous opportunities for automation and calculation”, he says, “some tasks, such as analyzing images, have proven to be difficult and error-prone and, therefore, using computers can often lower the quality and usefulness of the results. For tasks such as this, Human Computation can be much more effective.”

“Additionally, by framing the work task in the form of a game, we are able to quickly and effectively communicate the objective and achieve higher engagement from a community of employees as players of the game.”

The use of Productivity Games at Microsoft stretches back several years. Early use of games to increase quality improvement efforts in Windows began in 2006. In August 2008, Forrester released a report on Serious Games ("It's time to take games seriously," by TJ Keitt and Paul Jackson) with the insightful prediction that "the strongest ROI and ultimate adoption will be in Serious Games that help workers do real work."

The Windows Security Test team deployed a game designed around code reviews in March 2009. The belief was that work and fun need to co-exist to help keep employees motivated through the ebb and flow of the product cycle and that you must vary defect detection approaches to get the best results.

The goal of the PageHunt Game is to improve the relevance of the search results. Page Hunt shows users a Web page, without the URL, and asks them what search query they would type to get to that page. If their query does return the Web page on Microsoft's search engine, they get points.

the Language Quality Game was developed to encourage native speaking populations to do a final qualitative review of the Windows user interface and to help identify any remaining language issues.

In addition to the abovelist, there's a lot of work going on in the Office Labs group to experiment with the use of games in Microsoft Office.

The Office Labs Skill Tracker adds elements of game play into Office to motivate users to explore more of the applications, learn new features, and boost their productivity.

Skill Tracker will be released in late 2009. Office Labs Program Manager Jennifer Michelstein, who is coordinating the Skill Tracker project, believes that "adding elements of game play to Office can motivate people to learn more features and boost their productivity, while having fun, competing, and feeling good about learning. A key variable is integrating the right level of fun in Office, so that game elements boost instead of reduce overall productivity."