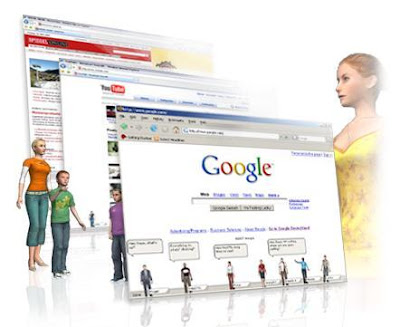 With all the attention on whether Google will launch a virtual world version of Google Earth (possibly connected in some way to SketchUp), two moves by Microsoft into the Serious Games and in response to SketchUp market further demonstrates that 2008 will be the Year of the Virtual World.

Reworking code and experience from MS Flight Simulator, ESP is targeted to the corporate training and simulations market - the so-called Serious Games market that Microsoft conservatively estimates is a $9 billion market. While nothing close to a virtual world - the ESP site promises that it can connect up to 30 people at the same time, and that the simulation engine:

ESP offers the code and build structure for the creation of “serious games” and the move was covered in depth at Futurelab, which reproduces my original post $9 Bi: Microsoft's Conservative Estimate For The Serious Games Market.

In a previous move, Dassault Systems launched, in partnership with Microsoft, a virtual Microsoft Earth called 3DVIA. The Dassault link-up to Microsoft enhances an ecosystem of products and platforms targeted primarily to the corporate market.

And finally, Microsoft’s launch of the Silverlight beta offers competition to Flash for creating richer online experiences including the ability to embed video.

The combination of small steps by Microsoft, including the new entry into the Serious Games Market, may at least act as protective flanks against the possible entry of Google in the virtual worlds market, while laying claim to some of the corporate turf that has been the domain of smaller studios.